Bombay High Court: K.R. Shriram, J. dismissed an admiralty suit filed by the plaintiff insofar as he claimed wages under the provision of Section 129 of the Merchant Shipping Act, 1958.

The plaintiff was a seafarer and worked as Chief Engineer on board two shipping vessels — namely, Malaviya Thirty-Three and Bharati-S — both owned by GOI Offshore Ltd., which was under liquidation. According to him, wages which were due to him from working on both the vessels were not paid to him. He claimed the same under the present suit along with interest. The plaintiff further claimed wages under Section 129 of the Merchant Shipping Act.

The question before the Court was whether the plaintiff was entitled to approach the Court to claim the amount under Section 129 of the Merchant Shipping Act?

It was noted that there are no averments in the plaint whatsoever as to how the plaintiff claims he is entitled to the amounts as claimed under Section 129 of the MS Act. Finally, it was held that since the jurisdiction is not with the High Court but only with the shipping master under Section 129, the Court could not determine the claim under Section 129. Therefore, the claim to such extent was rejected.[Jagdish Singh Bhaduria v. Bharati-S, 2019 SCC OnLine Bom 1179, decided on 05-07-2019] 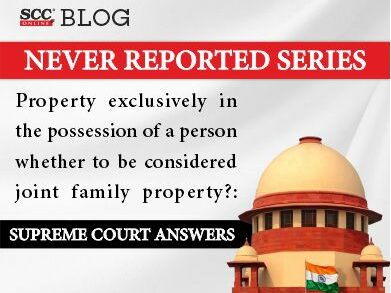 Property exclusively in the possession of a person whether to be considered joint family property?: Supreme Court answers

Collector erred in not considering the object of the BPL scheme for aaganwadi candidates, order reducing marks of petitioner set aside