Supreme Court of Pakistan: A Full Bench of Manzoor Ahmad Malik, Syed Mansoor Ali Shah and Qazi Muhammad Amin Ahmed, JJ. set aside the impugned judgment and conviction of the appellant by extending the benefit of doubt.

The prosecution’s case was hinged on the dying declaration made by the deceased Haji Muhammed Zamin Khan (complainant), in which he said that he was on his way back from a condolence meeting when the respondent herein fired upon him. After making this statement to the police, he succumbed to his wounds. The accused was arrested, convicted under Section 302 of Pakistan Penal Code, 1860 and sentenced to death. Peshawar High Court however altered the death penalty into imprisonment for life. Aggrieved by the said order, the present appeal was filed by complainant’s son.

The learned counsel for the appellant, Astagfirullah, contended that in the absence of any mitigating circumstance, there was no occasion for the learned High Court to alter the death penalty into imprisonment for life. Whereas learned counsel for the accused-respondent, Ghulam Mohyuddin Malik, questioned the legality of conviction on the ground that the case was founded primarily on a dying declaration and the prosecution miserably failed to show as to who recorded deceased’s last words and thus it was unsafe to maintain the conviction.

It was observed that dying declaration is an exception to the general rule of direct evidence and it is admitted to the detriment of an accused without the opportunity of cross-examination upon the declarant under the belief that a person, face to face with God, would tell nothing but the whole truth. Therefore, it was held that prosecution must demonstrate beyond the shadow of a doubt that the dying declaration comprised of the words of declarant alone without extraneous prompting or additions. Thus, the person who recorded the dying declaration is the most important witness to verify its veracity. However, this person was missing in the present case.

In view of the above, the Court held that it was grievously unsafe to maintain the conviction and hence by extending the benefit of the doubt to the appellant, the appeal was dismissed and respondent was directed to be released.[Somaid v. Ali Gohar, 2019 SCC OnLine Pak SC 9, decided on 30-04-2019] 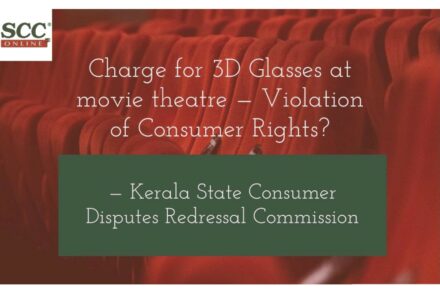 KSCDRC | Charging money for 3D Glasses for viewing a 3D Movie by theatre owners would amount to violation of ‘Consumer Rights’? Commission answers

NGT Vacancies| “This is an appalling situation”; Notify all vacancies in one go within 10 days: SC to Centre