Patna High Court: Mohit Kumar Shah, J. entertained a writ petition which sought relief against Bihar Public Service Commission to re-advertise by the way of corrigendum for the post of Dental Doctor and to be allowed to participate in the selection process.

The petitioner prayed for declaring the advertisement of 2015 issued by the Commission contrary to the Reservation Rules, 1991. The petitioner contended that she completed BDS course in 2016. It was stated that 617 posts in dental services were created by a notification of 2013, thus total sanctioned strength in the dental services became 700, out of which a few were earmarked for promotions and a few were already occupied, leaving 558 posts vacant. The Government of Bihar, enacted the Bihar Dentist Service Rule, 2014 for regulating appointments and service conditions in the dentist service. The commission issued an advertisement of 2015, for respective vacant posts and applications were invited from the eligible candidates. Further, it was stated that only 16 posts were earmarked for the backward class female.

The learned counsel for the petitioner, Kripa Nand Jha, submitted that the eligibility criteria in the advertisement of 2015 was BDS degree from a recognized University and should had been registered under the Bihar and Orissa Medical Act, 1916. The counsel brought to the notice of Court that since all the vacant posts were advertised and the last date of submission of the form was in 2015, the petitioner who received his degree in 2016, and similar aggrieved students would be precluded from obtaining employment for years to come.

The learned counsel for the respondent Commission, Zaki Haider, submitted that upon a requisition sent by the Department of Health, the Commission has published the advertisement for appointment as the post of basic grade Dental Surgeon under the Department of Health, Government of Bihar. He referred to the requisition sent by the Government in 2015, it had been submitted that the roster clearance was obtained from the General Administration Department and only thereafter, the vacancies were advertised, category wise. He further submitted that earlier also the Bihar Dentist Rules, 2014, issued vide notification in 2014, which was challenged before the High Court and the learned Division Bench of Court had dismissed the said writ petition.

It was contended by the other respondents, that proviso to Article 309 of the Constitution of India, conferred the powers to said State and specifically stated that as far as the prayer of the petitioner regarding issuance of a direction upon the respondents to re-advertise the post of Dental Surgeon and 35% horizontal reservation to the female candidates was permitted. They further contend that the petition was misconceived and bereft of any merit as to the aforesaid notification of the Department of 2016, and was not effective retrospectively. The requisitions were made by the Health Department and, accordingly, the Commission had issued the advertisement taking into consideration the rules of reservation i.e. the Bihar Reservation for Vacancies in posts and Services for Scheduled Caste, Scheduled Tribes and other Backward Classes Act, 1991.

The Court observed that, all adverting to the issue of applicability of the notification issued by the Department, admittedly the same is not applicable retrospectively and moreover, the roster clearance has been taken by the Health Department from the General Administration Department after which requisition was sent and thereafter, the advertisement has been published immediately in 2015, in pursuance to the Bihar Dental Service Rules, 2014.  Hence, the Court held that the said notification of the General Administration Department in 2016 cannot be applied for the recruitment process under consideration in the present writ petition. The contention of the petitioner regarding the Rules, 1991 being contrary to the advertisement of 2015 was also declared void. The Court noted submission made by the learned counsel for the petitioner to the effect that since the petitioner passed in the year 2016 and the advertisement had been issued in 2015, the petitioner was pre-empted from applying for the post of Dental Doctor in the Health Services of the Government of Bihar, and rejected the same as the petitioner was not eligible to apply in pursuance to the advertisement of 2015, hence she had no locus standi to challenge the eligibility conditions. Hence, the petition was dismissed.[Pragya v. State of Bihar, 2019 SCC OnLine Pat 689, decided on 17-05-2019] 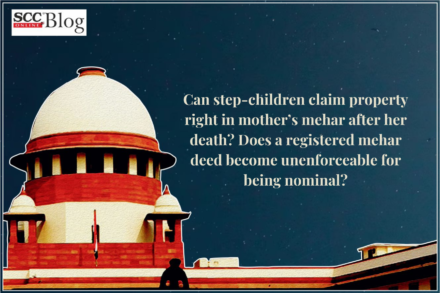 Can step-children claim property right in mother’s mehar after her death? Does a registered mehar deed become unenforceable for being nominal? SC answers

NCDRC | Reconsideration of a case by District Forum, though warranted, must not be directed if it results in miscarriage of justice to complainant