Rajasthan High Court: The Bench of Arun Bhansali, J., allowed the application filed to seek corrections, however, the Court ordered the applicant to deposit cost in regard to this.

The facts of the case were that the petitioners sought correction in one of the petitioner’s father’s name in the cause title of the order passed. It was claimed that due to some clerical mistake and typographical errors, mistake qua petitioner’s father’s name was committed and, therefore, in the interest of justice, the same should be permitted to be corrected. Along with the application, the amended cause title was also filed.

The Court in lucid words stated that nature of mistake which was claimed to be inadvertent typographical/clerical errors indicated that it was actually the result of casualness on the part of petitioners/counsel for the petitioners and such nature of mistakes leads to unnecessary burden on the Court in thereafter permitting corrections once the cases are decided. However, in view of the fact that once the petition had been decided and if corrections were not permitted, the petitioners would not be able to reap the benefits of the order, the Court permitted the corrections. Nevertheless, for the casualness on the part of the petitioners/counsel for the petitioners, it was ordered that the petitioner deposit a sum of Rs 2000 as the cost with the Legal Services Authority of the Court. [Pep Singh Rathore v. State Of Rajasthan, 2019 SCC OnLine Raj 501, decided on 17-05-2019] 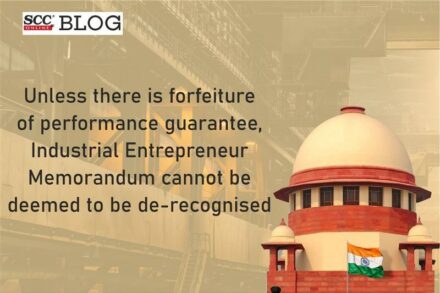 Unless there is forfeiture of performance guarantee, Industrial Entrepreneur Memorandum cannot be deemed to be de-recognised: SC