Arbitration and Conciliation Act, 1996 — Ss. 5, 9, 11 and 16: Review by High Court for recalling its order appointing an arbitrator, permissible. S. 5 of the A&C Act i.e. interdiction of judicial intervention is not applicable in the absence of an arbitration agreement itself. A court of record envelops all such powers whose acts and proceedings are to be enrolled in a perpetual memorial and testimony. It was held that being a superior court of record, the jurisdiction to recall its own orders is inherent in the High Court. [Municipal Corporation of Greater Mumbai v. Pratibha Industries Ltd., (2019) 3 SCC 203]

Consumer Protection — Services — Insurance — Restitutionary compensation — When warranted: In case of grant of restitutionary compensation, for non-allotment of insurance policy and non-refund of money deposited by consumer, mere refund of money with interest, is not sufficient when the consumer is wrongfully deprived of the use of his moneys. [Madhav Hari Joshi v. LIC, (2019) 3 SCC 196]

Criminal Procedure Code, 1973 — Ss. 397, 399 and 401 — Concurrent jurisdiction/powers of Sessions Judge and High Court with respect to criminal revision under S. 397 CrPC: In this case order passed by Judicial Magistrate concerned accepting closure report filed by CBI, was challenged in revision petition before High Court. High Court opined that although both High Court and Sessions Judge possess concurrent powers to entertain a criminal revision under S. 397 CrPC, there being no special circumstance in the present case to bypass the forum of the Sessions Judge, it would be appropriate to direct the revisionist to first approach the lower forum i.e. the Sessions Judge. High Court thus dismissed the revision petition on that basis. Having regard to facts: (i) that the present case was almost sixteen years old, and (ii) that the court must provide speedy justice as a matter of constitutional right, issue regarding choice of jurisdiction under S. 397 CrPC, not gone into and left open, setting aside High Court’s order, matter was remitted to High Court for decision on merits. [Chander Bhan Singh v. CBI, (2019) 3 SCC 193]

Defence and National Security — Defence Procurement — Judicial review — Limited scope of: Where prescribed procedure has been followed even if there are minor deviations, court should not interfere. Court on examining materials and after interacting with Air Force officers regarding acquisition and pricing, held, there is no violation in acquisition process and pricing. Earlier deal was cancelled because of long negotiations and standstills. New deal for 36 Rafale fighter jet aircrafts had better proposals and better terms and conditions and in national interest and security. Our country cannot afford to be unprepared/underprepared vis-à-vis our adversaries. Court cannot sit in appeal to scrutinise each aspect of process of acquisition. Minor deviations are immaterial. Permissible scope of judicial review in matters of contracts, procurement, etc. varies from case to case. Defence procurements are different from other procurements because of their unique and complex decision-making process.  Unique features are present, such as supplier constraints, technological complexity, foreign suppliers, high cost, foreign exchange implications and geopolitical ramifications. Defence preparedness and needs of armed forces not negotiable. [Manohar Lal Sharma v. Narendra Damodardas Modi, (2019) 3 SCC 25]

Delhi Special Police Establishment Act, 1946 (25 of 1946) — S. 4-A(1) r/w S. 4-B(2): Prerequisite of previous consent of Committee under S. 4-A(1) for appointment and transfer of CBI Director, held, also applicable to action of divesting CBI Director of his powers and functions even as an interim measure only, and also for appointment of an ad hoc Director. This is to ensure complete insulation of office of CBI Director from all kinds of extraneous influences, as well as for upholding integrity and independence of institution of CBI as a whole. Legislative intent in shielding and insulating office of CBI Director from any kind of extraneous influence has been foremost in mind of Parliament which intent found manifestation in changes brought about in law. Hence, writ petitioner CBI Director reinstated subject to review of the same by said Committee, but he directed not to take any major policy decisions, etc. until Committee had completed its consideration of the matter. [Alok Kumar Verma v. Union of India, (2019) 3 SCC 1]

Penal Code, 1860 — S. 409 — Conviction under, confirmed — Quantum of sentence — Reduction of — Grounds for: In this case, appellant-accused was driver of State roadways bus. He embezzled 85 litres of diesel meant for passenger bus. Appellant was now in his late sixties and no longer in service, is also ailing. He was not involved in any other criminal activity during his entire service tenure except case at hand (incident is about 19 years old). Accordingly, appellant’s jail sentence was reduced from 3 years to that undergone till date of judgment (about 1 year 3 months) and fine amount enhanced from Rs 15,000 to Rs 25,000, failing which he would further undergo 3 months, jail. [Jan Mohamad v. State of Haryana, (2019) 3 SCC 201]

Penal Code, 1860 — S. 497 — Adultery as a crime: This provision is violative of Arts. 14, 15(1) and 21 of the Constitution, being manifestly arbitrary, gender discriminatory, encroachment into women’s identity, dignity, liberty, privacy, sexual autonomy and freedom to make independent choice in matters of sexuality. It is an anachronistic law with underlying stereotypes of masculine chauvinism and dominance by treating women as mere property of men devoid of independent sexual agency. Change in social, cultural, moral, economic and political values and perspective with passage of time and in the wake of evolving notions of transformative constitutionalism and constitutional moralism, provision criminalising adultery has lost its efficacy. Global trend is also in favour of treating adultery as a civil wrong and a ground of divorce. Hence S. 497 IPC and S. 198 CrPC deserve to be struck down as unconstitutional. [Joseph Shine v. Union of India, (2019) 3 SCC 39]

Tenancy and Land Laws — Revenue Records — Mutation entries — Relevance of: Mutation entries neither create nor extinguish title over property. Mutation entries do not have any presumptive value of title. They only enables person in whose favour entries made is ordered to pay land revenue. [Bhimabai Mahadeo Kambekar v. Arthur Import And Export Co., (2019) 3 SCC 191] 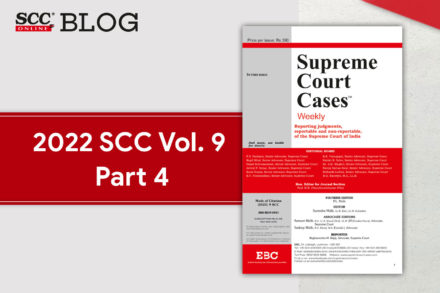