The petition was filed for a direction to the Principal District and Sessions Judge, Villupuram to consider petitioner’s bail petition on the same day of his surrender. The petitioner who wanted to surrender and apply for bail in connection with a criminal case registered under the SC/ST Act was represented by C. Prabakaran. While on the other hand, C. Raghavan, Government Advocate appeared for the State.

The High Court while allowing the petition, observed, “In view of the specific bar under Section 18 of SC/ST Act and also taking into consideration of the possibility of misusing the pious intention of the Parliament against innocent persons, there shall be a direction to the Principal District and Sessions Judge to consider the petitioner’s bail application, preferably on the same day of their surrender and pass appropriate orders in accordance with law after affording due opportunity to the victim under Section 15(a) of the SC/ST Act”. The petition was disposed of in the terms above. [Sethu v. State, 2019 SCC OnLine Mad 658, dated 04-03-2019] 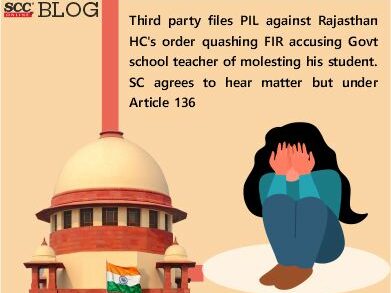 Insolvency for Individuals & Partnership Firms | Is it proper for NCLT to record finding regarding default when RP is yet to consider it and submit report? NCLAT discusses Ss. 95, 97, 99 IBC

SC allows video conferencing in matrimonial matter, though not as a matter of course