Earlier, the trial court vide its order dated 2-3-2017 had dismissed the wife’s application for striking off husband’s defence observing that non-payment of maintenance/arrears of maintenance cannot be a ground to do so. Aggrieved thereby, the wife preferred the present petition.

Jatin Sehgal, Adhirath Singh and Raymon Singh, Advocates appeared for the wife. On the other hand, the husband was represented by Laksh Khanna, Advocate who supported the trial court’s order.

The High Court noted that the respondent was in arrears of Rs 9,00,000 towards payment of maintenance to the wife. Furthermore, the Appellate Court vide its order dated 14-7-2017 evolved an equitable solution whereby husband’s employer was to deduct Rs 50,000 from his salary every month and pay that sum directly to the wife. Out of this, Rs 25,000 was to be the current monthly maintenance amount, and remaining Rs 25,000 were to be adjusted against the arrears. However, this order was not complied with by the husband.

In view of such facts and circumstances, the Court found that the husband’s failure to clear arrears of maintenance in terms of the Appellate Court’s order justified striking off his defence. Consequently, the wife’s application was allowed. [Swati Kaushik v. Ashwani Sharma, 2019 SCC OnLine Del 7133, dated 11-2-2019] 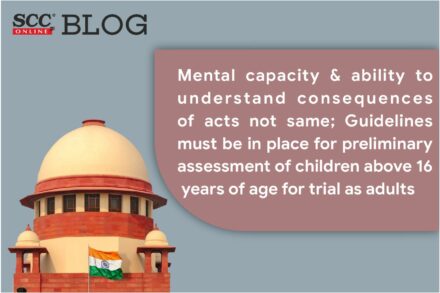 Mental capacity & ability to understand consequences of acts not same; Guidelines must be in place for preliminary assessment of children above 16 years of age for trial as adults: SC