Delhi High Court: Division Bench of Jyoti Singh and G.S. Sistani, JJ. allowed an appeal filed against the order of Family Court whereby an ex-parte divorce decree was passed against the wife.

The parties were married to each other. However, subsequently some differences arose and the husband filed for divorce under Section 13(1)(ia) of the Hindu Marriage Act. His petition was allowed and ex-parte divorce decree on ground of “cruelty” was passed against the wife. The wife applied to Family Court under Order 9 Rule 13 CPC for setting aside the ex-parte decree which was dismissed. Aggrieved thereby, the wife preferred the present appeal.

Trilok Chand and Rita, Advocates for the wife contended that she had instructed the previous counsel to prosecute the case on her behalf but he was not diligent in doing so. It was submitted that a complaint had also been filed against the previous counsel with Bar Council of Delhi.

The High Court issued a notice pursuant to which the husband appeared and submitted he had no objection to the appeal provided the wife does not take any unnecessary adjournment in the matter. The wife assured the Court to not cause delay in completion of the trial. As such, wife’s application under Order 9 Rule 13 read with Section 151 CPC was allowed and the ex-parte divorce decree passed Family Court was set aside. The matter was remitted back to Family Court. [R v. S.B.K., 2019 SCC OnLine Del 6929, dated 25-01-2019] 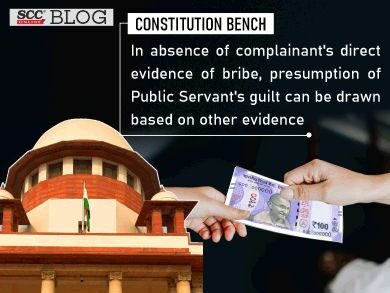 Demand and acceptance of gratification must be proved for an offence under s.7, Prevention of Corruption Act