Kerala High Court: A Division Bench comprising of Hrishikesh Roy and A.K. Jayasankaran Nambiar, JJ. was seized of a petition structured as a Public Interest Litigation praying for the following declarations:

The Court opined that consideration of the above prayers, as made in the petition, would require determination of many factual aspects which would not be feasible while exercising jurisdiction under Article 226 of the Constitution.

In view of the above, the petition was dismissed but the petitioner was granted liberty to establish a factual foundation for his claim before proper forum. [Dr S. Ganapathy v. State of Kerala, 2018 SCC OnLine Ker 5802, decided on 21-12-2018]

Transfer order cannot be quashed on ground of being a ‘widow’ 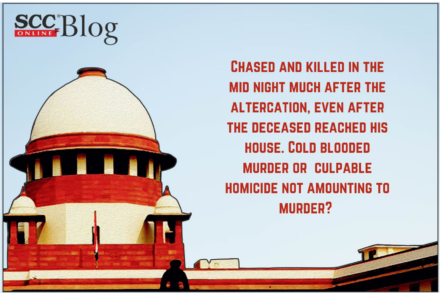 Chased and killed in the mid night much after the altercation, even after the deceased reached his house. Cold blooded murder or  culpable homicide not amounting to murder? SC decides

Payment of terminal benefits to ad-hoc teacher not to precede the determination of status of employment; PF can be paid