European Court of Justice: ECJ has provided guidance on the scope of the standstill obligation. It ruled that gun-jumping (when an acquiring company seeks to exercise control over a target company’s business operations pre-close) can only occur when the acquiring company’s action results in a lasting change in the control of the target business and not simply because the target company takes unilateral actions in anticipation of the merger.

In 2013, Ernst & Young (EY) entered into a merger agreement with KPMG Denmark. Danish law, on the lines of EU merger-control law, prohibited the parties to a merger transaction from taking any steps to implement the transaction prior to receiving clearance from the Danish Competition Council. It is the “standstill obligation” and its violation is considered to be “gun-jumping.”

As per the agreement, KPMG Denmark gave notice to terminate its cooperation agreement with KPMG International on the day that the merger agreement was signed, before the companies had even notified the Danish Competition and Consumer Authority (DCCA) of their proposed merger, much less received clearance for it. While the notice was effective immediately, the termination did not take effect until the transaction closed. Subsequent to the notice, KPMG International established a new auditing business in Denmark. In December 2014, the DDCA ruled that KPMG Denmark had breached its standstill obligation and had jumped the gun in implementing the merger. The parties appealed that decision, and the case was referred to the ECJ for a preliminary ruling.

ECJ noted that Article 7(1) (the “standstill obligation”) of the EU Merger Regulation (EUMR) limits the standstill obligation to “concentrations” as defined under Article 3 EUMR, i.e., to situations where there is a “change of control on a lasting basis” allowing an acquirer to exercise decisive influence over the target company. The ECJ added that even the partial implementation of a concentration falls within the scope of Article 7(1) EUMR. It explained that preparatory or ancillary acts to the concentration which do not lead to a change of control, do not fall within the scope of Article 7(1) EUMR.

In essence, the EUMR applies to any transaction constituting a concentration to which Regulation 1/2003 does not apply. This means that conduct of the merging parties may breach (i) the standstill obligation if it contributes to a change of lasting control prior to clearance by the Commission, or (ii) breach Article 101 TFEU if it does not lead to a change of control, but nevertheless restricts competition within the internal market. An example of the latter conduct could be an exchange of sensitive commercial information between two merging competitors.

The ECJ concluded that the termination of the cooperation agreement between KPMG Denmark and KPMG International was not subject to the prohibition of gun-jumping as termination did not contribute to the change of control over KPMG Denmark despite the fact that it took place before the DCCA had cleared the transaction. The ECJ further stated that whether an alleged gun-jumping violation causes market effects is irrelevant. [Ernst & Young v. Konkurrencerådet, [2018] Bus LR 1718, dated 31-05-2018]. 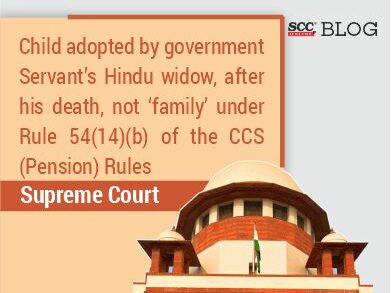 Child adopted by government servant’s Hindu widow, after his death, not ‘family’ under the CCS (Pension) Rules: Supreme Court