Special CBI Court (2G Spectrum Cases): In the infamous 2G spectrum case, the Special Court of CBI has acquitted all 19 accused amongst whom former telecom minister A. Raja and DMK MP Kanimozhi are also included. The verdict has been delivered on the basis of the charge-sheet framed by CBI and the Enforcement Directorate under various provisions of the IPC and the Prevention of Corruption Act.

The prosecution had alleged that Mr. A. Raja received illegal gratification of Rs. 200 crore for favors granted by him to Swan Telecom (P) Limited (STPL) by issuing 13 licenses and allocating spectrum in the year 2008-09 and that this money was later shown as untainted by executing several commercial transaction documents.

On observing the settled position of law on this point, the Court noted that in a separate judgment all the accused have been acquitted in the case relating to schedule offences with the finding that the prosecution had failed to prove its case beyond reasonable doubt. Therefore, the Court held that in view of acquittal of accused in the case relating to schedule offence, there are no “proceeds of crime” and as explained that “proceeds of crime” is the foundational fact for the offence of money-laundering here can be no offence of money-laundering, as nothing remains to be laundered. 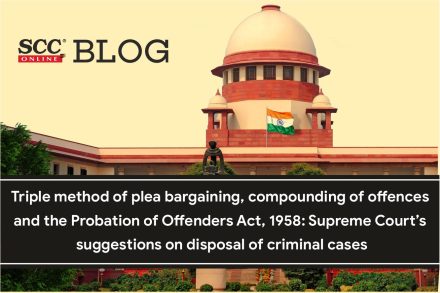 Triple method of plea bargaining, compounding of offences and the Probation of Offenders Act, 1958: Supreme Court’s suggestions on disposal of criminal cases

Reported By Editor Published on October 31, 2022