National Consumer Disputes Redressal Commission, New Delhi: In the order passed by Ajit Bharioke, S.M. Kantikar,J., for the complaint filed by plaintiff (patient/minor) in order to seek compensation on the ground of alleged medical negligence on the part of treating doctor. The allegations being that the plaintiff was suffering from a serious disease and in the process of diagnosis his treatment was changed due to which his health had further deteriorated. The complaint was filed with further allegations of huge financial loss and mental agony.

Reliance was placed on Supreme Court’s decision in but after crucially examining the foregoing discussions and relying upon the medical literature and the legal precedence in the case of Dr. Laxman Baaalakrishna Joshi v. Dr. Trimbak Bapu Godbole, AIR 1969 SC128, A.S. Mittal v. State of U.P., AIR 1989 SC 1570 where it was laid down that “when a doctor is consulted by a patient, the doctor owes certain duties :

(a) duty of care in deciding whether to undertake the case;

(b) duty of care in deciding what treatment to give; and

(c) duty of care in the administration of that treatment.

And a breach of any of the above may give a cause of action for negligence and the patient may on that basis recover damages from his doctor”.

Further reliance was placed on the Apex Court’s judgment in Jacob Mathew v. State of Punjab, AIR 2005 SCC 3180, where it was held that, “the complainant is required to prove that the doctor did something or failed to do something which in the given facts and circumstances, no medical professional in his ordinary senses and prudence would have done or failed to do”.

The Commission further observed that there was no medical negligence on the part of opposite party while treating the patient and the patient was properly taken care of by proper diagnosis, treatment and without any lapse, as per the reasonable and standard of medical practice. Hence, the complaint was not allowed. [Vaibhav Arora v. Sunil J. Parikh, Consumer Case No. 58 of 2003, decided on 12-12-2017]

COVID 19 | Raj HC | Bail applications, Appeals under SC/ST Act, applications for suspension of sentence not to be listed in the category of “extreme urgent matters” 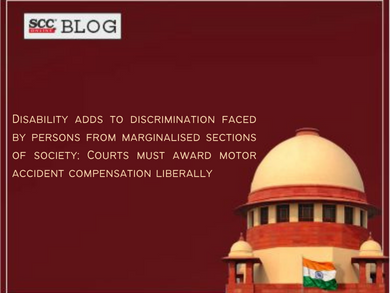