National Company Law Appellate Tribunal: In the judgment delivered by S.J. Mukhopadhaya (Chairperson), AIS Cheema (Judicial Member) and Balvinder Singh (Technical Member) dismissing the appeal against the impugned order of the Competition Commission of India (CCI) dated 8-2-2017. Mr. Subodh Kumar Sharma, the appellant had filed a complaint against Gateway Terminals India Pvt Ltd (Respondent 2) and Gujarat Pipavav Port Ltd. (Respondent 3) for contravention of sub-section 3(4) and Section 4 of the Competition Act, 2002 and contending that the respondents having a major market share for providing container terminal services were deliberately diverting traffic of ships to Papavav ports for commercial advantages.

The Tribunal held the observations of CCI, that ‘the market share of the first respondent has been declining and such decline does not make it to be in a dominant position’, to be correct. There were thirty three other container freight station which were acting as a competitive constraint for the respondent The appellants however failed to prove that the respondent blocked the terminals at Jawahar Lal Nehru Ports forcing ships to dock at Papavav and the Tribunal further held that the mere reliance on paper book is not enough to invoke the Act for the same.

No substance was found by this Tribunal in the submissions of the appellant thus no interference in the impugned order was made. The appeal was dismissed with costs quantified at Rs 1 Lakh to be equally divided and paid by appellant to Respondents 2 and 3. [Subodh Kumar Sharma v. Competition Commission of India, Competition Appeal (AT) No. 04 of 2017, order dated 5-12-2017]

No eviction can be ordered unless grounds made out, even if parties have entered into settlement: SC 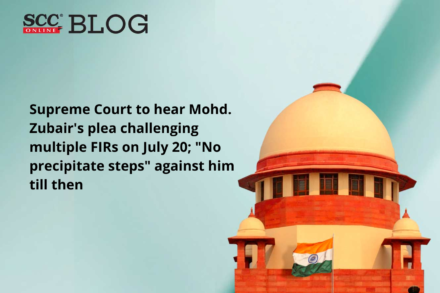 Supreme Court to hear Mohd Zubair’s plea challenging multiple FIRs on July 20; “No precipitate steps” against him till then

Bom HC diverges from Madras & Karnataka HC’s view on whether MACT has jurisdiction over personal accident claims or not: Read the proposition