Supreme Court: The bench of SA Bobde and L Nageswara Rao, JJ defined the scope of the words ‘competent Court’ in Section 2(d) of Maharashtra Control of Organised Crime Act, 1999 (MCOCA) and held that the meaning of the term is not restricted to Courts in Delhi and charge sheets filed in Courts in other States can be taken into account for the purpose of constituting continuing unlawful activity. It was also held that there cannot be a prosecution under MCOCA without an organised crime being committed within Delhi.

The Court was hearing the issue relating to conviction of the respondent who was involved in in committing unlawful activities along with other members of a crime syndicate since 1985 in an organized manner, apart from being involved in 20 cases of attempt to murder, murder, extortion, rioting, cheating, forgery and for offences under the Uttar Pradesh Gangsters and Anti-Social Activities (Prevention) Act, 1986. The competent criminal Courts in and outside Delhi had taken cognizance of 8 crimes. Considering the nature of the crimes committed by the respondent, it was deemed proper to invoke MCOCA.

Senior Advocate Siddharth Luthra, appearing for the State of Delhi submitted before the Court that:

“organized crime is a serious threat to the society and that statement of objects and reasons have to be taken into account for interpretation of the provisions of the Act.”

He said that criminal cases in which cognizance was taken by Courts outside Delhi are relevant for the purpose of proceeding against the respondents under MCOCA. He added that organized crime is not restricted to territory within a State and a restrictive reading of the word ‘Competent Court’ would defeat the purpose for which the statute was enacted.

Respondent’s counsel, Senior Advocate UU Lalit, on the other hand, argued that MCOCA operates only within the territorial limits of National Capital Territory of Delhi and said:

“MCOCA is a special legislation which deals with organized crime and unless the essential ingredients of the offences under Sections 3 and 4 are made out, a case under the said statute cannot be registered.”

Agreeing with the arguments of the State, the Court said:

“Organised crime is not an activity restricted to a particular State which is apparent from a perusal of the Statement of Objects and Reasons. A restrictive reading of the words “competent Court” appearing in Section 2 (1)(d) of MCOCA will stultify the object of the Act.”

The Court further said that if members of an organised crime syndicate indulge in continuing unlawful activity across the country, it cannot by any stretch of imagination said, that there is no nexus between the charge sheets filed in Courts in States other than Delhi and the offence under MCOCA registered in Delhi.

The Court, however, agreed with the respondents on the argument that an activity of organized crime in Delhi is a sine qua non for registration of a crime under MCOCA. In the absence of an organized crime being committed in Delhi, the accused cannot be prosecuted on the basis of charge sheets filed outside Delhi. Noticing that there was no organised crime committed by the Respondents within the territory of Delhi, the Court held that there was no cause of action for initiation of proceedings under MCOCA in the present case and that the case should be heard by the competent court that has the territorial jurisdiction. [State of NCT of Delhi v. Brijesh Singh,  2017 SCC OnLine SC 1206, decided on 09.10.2017] 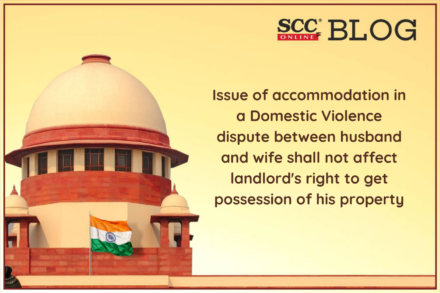 Issue of accommodation in a Domestic Violence dispute between husband and wife shall not affect landlord’s right to get possession of his property: SC