The National Human Rights Commission, on the basis of media reports about a gang rape in Gurugram on 30th May, 2017, has issued a notice to the city Police Commissioner calling for a detailed report. The Commission has observed that the incident makes it clear that night patrolling on the road by the police was not being done.

The Director General of Police, Haryana has been directed to inform about the steps being taken to ensure safety of the citizens, specially the women. They have been given four weeks to respond. The Commission has also called for comments of the Police Commissioners of Delhi, Faridabad and Senior Superintendents of Police, NOIDA and Ghaziabad with their suggestions, if a joint action programme by the law enforcing agencies of the NCR region could be planned and executed to deal with such heinous crimes against women. Their response is expected within six weeks.

The Commission has observed that though the direct involvement of any public servant in the incident is not apparent yet the sorrowful contents of the media reports are indicative of an atmosphere of fear, insecurity and uncertainty prevailing in the NCR region, especially the places like NOIDA, Faridabad and Gurugram etc. Ensuring safety of the citizens, specially, the women and children, is one of the prime duties of the State. It seems that some conspicuous steps are immediately required to be taken by the law enforcing agencies so that these kinds of incidents do not reoccur.

According to the media reports, carried on the 7th & 8th June, 2017, a woman had some altercation with her neighbours in the night of 29th May, 2017. She decided to go to her parent’s house. On NH-8, she got a lift from a truck driver who tried to harass her so she left the vehicle. Thereafter, she was offered a lift by occupants of a Magic van heading towards Gurugram only to be sexually assaulted by them. Her perpetrators snatched her daughter away and covered her mouth to stop her from crying. Before leaving the place of crime, one of the men threw the crying baby at the road divider inflicting injuries on her head.

The woman walked on the road with her injured daughter and reached a factory, where one guard on duty asked her to wait till the dawn when the baby was examined by a doctor who told that she was dead. The woman travelled with her child’s dead body in a Metro train to reach her parents place at Tughlaqabad in Delhi. There, another doctor examined the baby and declared her dead. Later, the woman again went to Gurugram to lodge an FIR.

Stalker consumes poison in front of a girl’s house. Can she be tried for abetment of suicide? SC answers 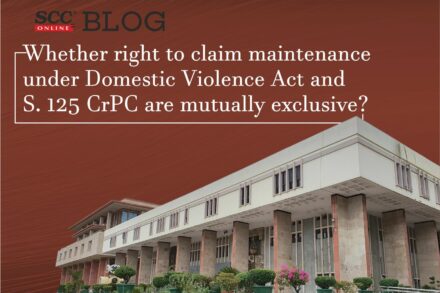