The National Human Rights Commission has taken suo motu cognizance of a media report that 59 families of Dalits remain without rehabilitation even after nine years following forced eviction from their houses at Nangal Dewat village in Delhi due to the expansion of the Indira Gandhi International Airport’s Terminal-3. Reportedly, there were 122 families of Dalit residing in the area, out of which 63 got alternate accommodation but 59 families were still waiting their rehabilitation.

The Commission has observed that the contents of the news report are painful and indicative of grave violation of human rights of the aggrieved families. It has issued notices to the Chief Secretary, Government of NCT of Delhi and the Chairman, Airports Authority of India, calling for reports within six weeks on the steps taken or proposed to be taken for relief and rehabilitation of these 59 families. The Commission has also observed that it is the duty of the State to provide basic amenities to its citizens, including the shelter. The authorities, who reportedly forced these families of Dalits, are liable to provide them with alternate accommodation, in lieu of their land and houses which have been taken over by the State.

According to the media report, carried on the 14th January, 2017, the families of the Dalits, evicted from their village due to the expansion of the Delhi Airport, have knocked the doors of almost every concerned authority in the Centre and the Government of NCT of Delhi but to no avail. They have been facing discrimination due to their caste. One such family, who re-allocated into another locality, was not allowed to cremate their dead as he was a Dalit from a different village. Expenditure on rented accommodation has put them on lot of financial burden in addition to other expenses related to the school fee of children etc.

Bombay High Court| Once prosecution has proved the offence of rape, there is no reason for the Trial Court to award a lesser sentence than what the statute prescribes

Matter remanded back to Bombay High Court for examination on facts and law; adjudication directed to be expedited: SC 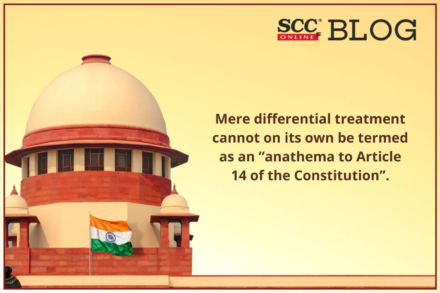 Mere differential treatment cannot on its own be termed as an “anathema to Article 14 of the Constitution”: SC