Supreme Court: In the petition highlighting the alarming increase in the use of drugs and alcohol among children in India, the Court said that these are matters which should not be brushed under the carpet. The authorities should consider how children should be sensitized, having due regard to the age and stage of the child, of the dangers of drug use, the necessity to report drug use and the need to develop resistance to prevailing peer and social pressures. The 3-judge bench of T.S. Thakur, CJ and A.M. Khanwilkar and Dr. D.Y. Chandrachud, JJ listed the below mentioned immediate measures to be taken up by the Union of India:

Taking note of the recent reports both of official and private agencies which indicate that there has been a substantial increase in the prevalence of use and abuse of substances in young children, the Court directed the Union Government to: 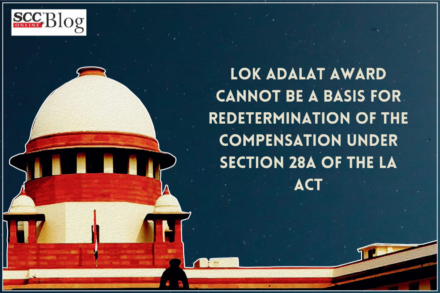 Lok Adalat Award cannot be a basis for redetermination of the compensation under Section 28A of the LA Act: SC