Supreme Court: In the review petition filed in the Soumya Rape and Murder case where the Court had set aside the death sentence awarded to the accused by the Kerala High Court, the 3-Judge Bench of Ranjan Gogoi, P.C. Pant and U.U. Lalit, JJ issued notice to Justice Markandey Katju, former Supreme Court Judge and requested him to appear in Court in person and participate in the proceedings on 11.11.2016 as to whether the judgment and order dated 15.09.2016 suffers from any fundamental flaw so as to require exercise of the review jurisdiction.

Justice Katju had, in a blog published on Facebook, expressed his views that the Supreme Court has grievously erred in law by not holding Govindaswamy guilty of murder. He had said that the Court had overlooked is that Section 300 IPC, which defines murder, has 4 parts, and only the first part requires intention to kill. If any of the other 3 parts are established, it will be murder even if there was no intention to kill. It is regrettable that the Court has not read Section 300 carefully. The judgment needs to be reviewed in an open court hearing. Taking note of the said post, the Bench said that such a view coming from a retired Judge of this Court needs to be treated with greatest of respect and consideration.

Justice Katju by a post on his Facebook page said that he would be delighted to appear and discuss the matter in open court, but would only like the Judges to consider whether, being a former Supreme Court Judge he is debarred from appearing by Article 124(7) of the Constitution. If the Judges hold that it does not debar him, he would be happy to appear and place his views.

Cooperative Societies are covered under the ambit of RTI Act 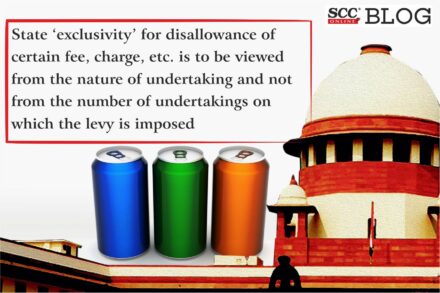 State ‘exclusivity’ for disallowance of certain fee, charge, etc. is to be viewed from the nature, not the number of undertakings on which the levy is imposed: SC