Supreme Court: The Bench of Dipak Misra and R.F. Nariman, JJ allowed petitioner Rahul Gandhi to withdraw his Special Leave to Appeal seeking the quashment of the defamation proceedings against him for the statements made by him against the RSS. Kapil Sibal, appearing on behalf of the petitioner, submitted that the petitioner shall go by whatever has been stated in the writ petition preferred before the High Court of Bombay. The petitioner had, in his statement, accused RSS for the Killing of Mahatma Gandhi which formed the basis for the defamation suit against him before the High Court of Bombay.

Rahul Gandhi had also preferred Writ Petition No. 64 of 2015 invoking the jurisdiction of this Court under Article 32 of the Constitution of India challenging the constitutional validity of Sections 499 and 500 of the Penal Code which was heard along with batch of matters and has been decided vide judgment in Subramanian Swamy v. Union of India, Ministry of Law, (2016) 7 SCC 221 where the Criminal defamation law was held to be constitutionally valid. The division bench had also held that in that matter that criminal defamation which is in existence in the form of Sections 499 and 500 IPC, is not a restriction on right to freedom of speech and expression that can be characterized as disproportionate. Right to free speech cannot mean that a citizen can defame the other as protection of reputation is a fundamental right as well as a human right. [Rahul Gandhi v. Rajesh Mahadev Kunte, 2016 SCC OnLine SC 892, decided on 01.09.2016] 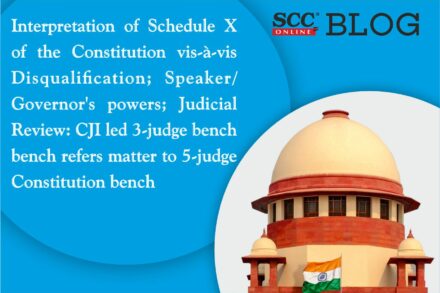