Supreme Court: The bench of V. Gopala Gowda and A.K. Goel, JJ, while deciding the question as to whether the consent of the owner of the premises is necessary for renewal of tenant’s licence under the Section 492(3) of the Kerala Municipality Act, 1994, held that the requirement of consent of landlord is applicable only when a person intends to obtain a licence for the first time. It was held that renewal or subsequent application for obtaining licence on expiry of the period of the existing licence, during the currency of the tenancy, is not applicable for obtaining licence. However, the Court clarified that even in the case of application for obtaining licence for the first time, the tenant cannot be deprived of running lawful business merely because the landlord withheld the consent as valid tenancy itself has implied authority of the landlord for legitimate use of the premises by the tenant.

While interpreting the Section 492 (3) of the Kerala Municipality Act, 1994, the Tribunal and the single bench of Kerala High Court had said that Under Section 492(3) of the Kerala Municipality Act, a consent of the owner is needed only for obtaining licence for the first time. Since the petitioner has not applied for licence for the first time the Corporation cannot impose a condition for obtaining a consent from the landlord. It was further held that The Corporation cannot insist upon such a tenant for production of a written consent from the landlord for the purpose of issuing of the licence. A statutory tenant can be evicted from the leased premises only in accordance with the various provisions contained in the Kerala Buildings (Lease and Rent Control) Act, 1965.

The Court, noting that since the possession of the tenant is lawful, the landlord is not entitled to withhold his consent for the conduct of the business for which the premises were given on rent, agreed with the abovementioned view and hence, set aside the order of the division bench of the High Court, thereby, restoring the order of the Tribunal as affirmed by the Single Bench of the High Court. [Sudhakaran v. Corp. of Trivandrum, 2016 SCC OnLine SC 666, decided on 05.07.2016]

Megh HC | Will a minor at the time of death of a deceased employee be entitled to claim compassionate appointment upon attaining majority? HC answers

J&K and Ladakh HC | “Anyone possessing knowledge of who is who can name the Minister holding portfolio of works”; HC quashes defamation complaint against Arnab Goswami and Aditya Raj Kaul 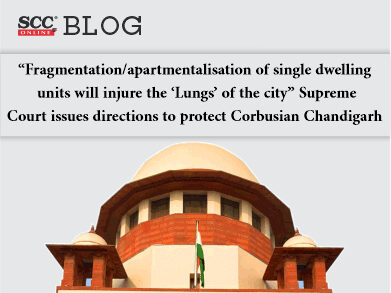 “Fragmentation/apartmentalisation of single dwelling units will injure the ‘Lungs’ of the city”; Supreme Court issues directions to protect Corbusian Chandigarh