Delhi High Court: Hearing a writ petition filed by an acid attack victim pleading for Rs. 50 lacs as compensation, reimbursement of her medical expenses and employment with the Government, the Single Bench of Manmohan J. passed interim orders providing free medical treatment of the petitioner at Lok Nayak Jai Prakash Hospital along with complete reimbursement of her medical costs incurred in the past and Government employment for the petitioner.

The petitioner had suffered the acid attack on 15.02.2006 upon asking the accused tenant of her father’s house to vacate the place. Since then she had undergone multiple surgeries to remediate the damage but had turned blind gradually and was in the need of constant treatment. Having spent Rs. 25-30 lakhs as her medical expenses, the petitioner’s family expressed their inability to bear the medical costs any further. The petitioner admitted to having received Rs. 3 lakhs in compensation, but termed it inadequate. Appearing as the respondent, the Delhi Government represented by Rahul Mehra cited the Delhi Victims Compensation Scheme, 2015 (yet to be implemented), which designates Rs. 7 lakhs as the amount of compensation determined for such victims by the Government, however, submitting that the Government was willing to abide by any orders passed by the Court.

Observing that the State owes a duty to provide free medical treatment to acid attack victims, Court averred that Rs. 7 lakhs might be arbitrary and unreasonable for acid attack victims in some cases, hence such a ceiling shall not be placed on the compensation amount. Also, the Court noted that employment shall be given to the petitioner on a compassionate basis in accordance with her competence. [Renu Sharma v. GNCT of Delhi, 2016 SCC OnLine Del 1706  decided on 18/03/2016] 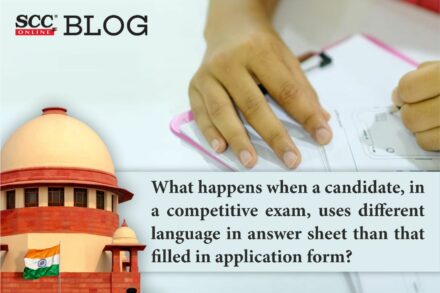 Explained| What happens when a candidate, in a competitive exam, uses different language in answer sheet than that filled in application form?