Supreme Court: Considering the serious issue of sexual abuse of girl children raised by the women lawyers of the Supreme Court, the Court citing it’s inability to provide harsher punishment to the offenders, suggested to Legislature to do the same and said that there can be no doubt that a girl child is a minor but a time has come where a distinction can be drawn between the girl children and the minor, may be by fixing the upper limit at 10 for the girl children.

The bench of Dipak Misra and N.V. Ramana, JJ further held that there is need to take steps for stopping this kind of child abuse and hence, possibly there is a need for defining the term “child” in the context of rape and thereafter provide for more severe punishment in respect of the culprits who are involved in this type of crime.

Putting forth the fact that the perverted culprits have not even spared 28 days old baby girl and also in certain situations have monstrously behaved with other small girls who come within two to ten years of age as if they are totally trivial commodities, the petitioners had prayed for imposition of “chemical castration” as an additional punishment for such child abusers. The Court, considering the plea of the petitioners, suggested the Parliament to respond to the agony of the collective and said that when a society moves in this way, there has to be instillation of fear of law and the punishment has to be definitive in a different way. [Supreme Court Women Lawyers Association (SCWLA) v. Union of India,  decided on 11.01.2016] 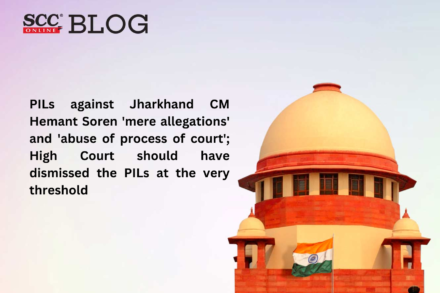 PILs against Jharkhand CM Hemant Soren ‘bald allegations’ & ‘abuse of process of court’; High Court should have dismissed the PILs at the very threshold: SC

By Prachi Bhardwaj Published on November 14, 2022