Kerala High Court: On a Writ Petition filed by several petitioners to declare Shariat Law applicable in regard to inheritance of property by Muslim women as unconstitutional and void for being violative of Articles 14, 15, 19, 21 and 25 of the Constitution, a division bench of Ashok Bhushan CJ and A.M. Shaffique J dismissed the petition on the ground that the issues raised in the Writ Petition cannot be adjudicated in proceedings under Article 226 of the Constitution and has to be left to the wisdom of Legislature which is competent to enact law on the subject.

The Counsel for the petitioner K. Ramakumar pleaded that Shariat law discriminates among Indian citizens on the ground of sex, as it provides that if a Muslim father dies leaving only daughters, those daughters will not get share equivalent to that of the share she would get if she was a male and will have to share properties along with distant relatives of the deceased, whereas the male child takes the entire property and has to share it only with the spouse and parents of the deceased. The Counsel further pleaded that religious practices have to be made more practicable and workable to adapt itself to the changing needs of the Society. The Counsel for the respondent pleaded that for challenging the Shariat law which has got statutory recognition, a legislation has to be brought into by the competent legislature.

The Court referred Maharshi Avadhesh v. Union of India 1994 Supp (1); SCC 713, where it was held that “the respondent cannot be directed to enact Shariat Law as these are the all matters for legislature”. The Court held that the issue of modification of personal law is not something which can be adjudicated by this Court in a Public Interest Litigation and has to be left for the Legislature to consider the issues raised and frame a competent legislation thereof. Accordingly, the Court dismissed the PIL challenging the constitutionality of Shariat law. Khuran Sunnath Society v. Union of India, 2015 SCC OnLine Ker 13643, decided on 02.07.2015 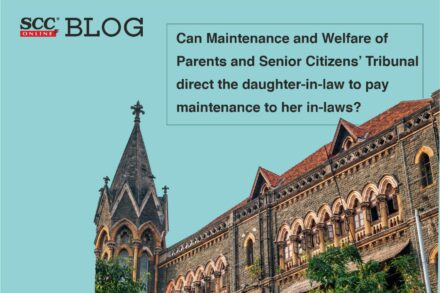 Can Maintenance and Welfare of Parents and Senior Citizens’ Tribunal direct the daughter-in-law to pay maintenance to her in-laws? Bom HC decodes

Ori HC | Whether Proviso to Sub-Section (5) of S. 43 of Real Estate (Regulation and Development) Act, 2016 is ultravires of Constitution of India? HC denies