Supreme Court: Dismissing the present appeals filed on the issue of land acquisitions in several villages of Noida, Gautam Budh Nagar and Greater Noida, the 3 Judge Bench comprising of H.L.Dattu, C.J, A.K. Sikri and Arun Mishra, JJ., observed that the Allahabad High Court had studied the ground realities to come up with a practical solution by adequately compensating the land owners namely- increasing the compensation by 64.7% is payable immediately without taking away the rights of the land owners to claim higher compensation under the machinery provided in the Land Acquisition Act; and directing allotment of developed abadi land to the extent of 10% of the land acquired of each of the land owners. The Bench thus affirmed the decision of the Allahabad High Court.

The case evolved from plethora of writ petitions filed challenging the validity of the Notification dated 12.03.2008 which was issued by the State of U.P under Section 4 read with Section 17 of the Land Acquisition Act, 1894, for colorful exercise of power by acquiring land arbitrarily and with mala fide intentions for the stated purpose of “Planned Industrial Development”. The Notification issued had taken away the right of objection under Section 5A through Section 17(4).Various land owners also filed writ petitions against the decision of the Government to provide the land to a third party for development. The Notification was challenged before the full Bench of Allahabad High Court, wherein the High Court held that the State Government was wrong to invoke the urgency provisions of Section 17 (1); and (4) of the Land Acquisition Act, 1894.

The learned counsel for the appellants Amrendra Sharan, along with other counsels, pointed out the illegalities that were committed in issuing the Notification for acquisition, and argued that the Notification for the acquisition should be quashed due to fraud committed by the Government by not using the land acquired for the stated purpose. Whereas, counsel for the respondents, L.N. Rao contended that the appeals should be dismissed on the ground of inordinate delay and laches, since majority of the land owners have already accepted the compensation provided by the Government, thereby accepting the Government’s proposition of acquiring the land.

Upon perusing the contentions, the Court observed that on one hand, invocation of urgency provisions under Section 17 of the 1894 Act and dispensing with the right to file objection under Section 5A of the Act, was found illegal; and on the other hand, there arose a situation where because of delay in challenging these acquisitions by the land owners, developments have took place in these villages and in most of the cases, third party rights have been created. The Court further observed that the present case does not call for the Court’s interference under Article 136.  Savitri Devi v. State of Uttar Pradesh, 2015 SCC OnLine SC 507, decided on 14.05.2015 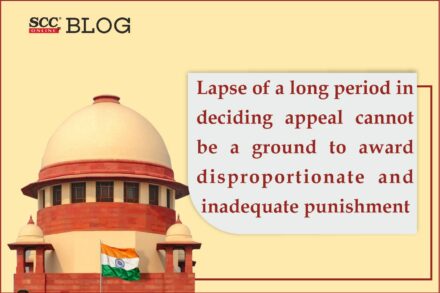 Lapse of a long period in deciding appeal cannot be a ground to award disproportionate and inadequate punishment: SC 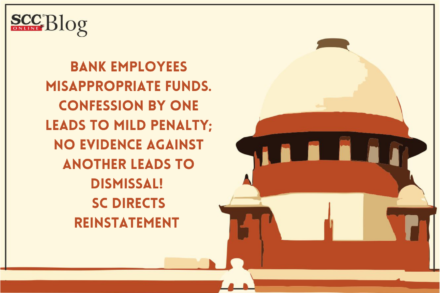 Bank Employees misappropriate funds. Confession by one leads to mild penalty; No evidence against another leads to dismissal! SC directs reinstatement

When the legislature has prescribed minimum sentence without discretion, the same cannot be reduced by the Courts