Supreme Court: Taking judicial notice of the fact that over the years, rivers in India have been affected by the alarming rate of unrestricted sand mining which is damaging the eco-system of the rivers and safety of bridges, weakening the river beds and destroying the natural habitat of many organisms, the bench of M.Y. Eqbal and P.C. Ghose held that the act constitutes an offence and whosoever commits such act, is liable to be punished for committing such offence under Sections 378 and 379 IPC.

Differentiating the provisions of the Mines and Minerals (Development and Regulation) Act, 1957 (MMDR Act) and Section 378 IPC, the Court held that the contravention of terms and conditions of mining lease or doing mining activity in violation of Section 4 of the MMDR Act is an offence punishable under Section 21 of the MMDR Act, whereas dishonestly removing sand, gravels and other minerals from the river, which is the property of the State, out of State’s possession without the consent, constitute an offence of theft. Hence, it was held that for the commission of offence under Section 378 IPC, on receipt of the police report, the Magistrate having jurisdiction can take cognizance of the said offence without awaiting the receipt of complaint that may be filed by the authorized officer for taking cognizance in respect of violation of various provisions of the MMDR Act.

In the case where the appellants and the respondents were represented by Anil Katiyar and R.C. Kaushik, respectively, the question for consideration was that whether the provisions of MMDR Act explicitly or impliedly excludes the provisions of Indian Penal Code when the act of an accused is an offence both under IPC and under MMDR Act as the same may attract the principle of double jeopardy. Answering the question in negative, the Court held that a subsequent trial or a prosecution and punishment is not barred if the ingredients of the two offences are distinct and the principle of double jeopardy are not attracted in such scenario. State of NCT of Delhi v. Sanjay, Criminal Appeal No. 499 of 2011, decided on 04.09.2014

Explained: What happens to a petition filed under wrong nomenclature? 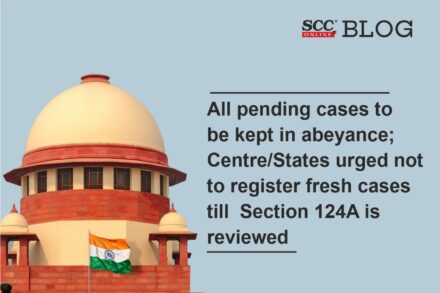 Sedition Law under scanner| All pending cases to be kept in abeyance; Centre/States urged not to register fresh cases till Section 124A is reviewed: SC

Principles governing power of Courts to direct Retrial and Joint Trial, as laid down by Supreme Court