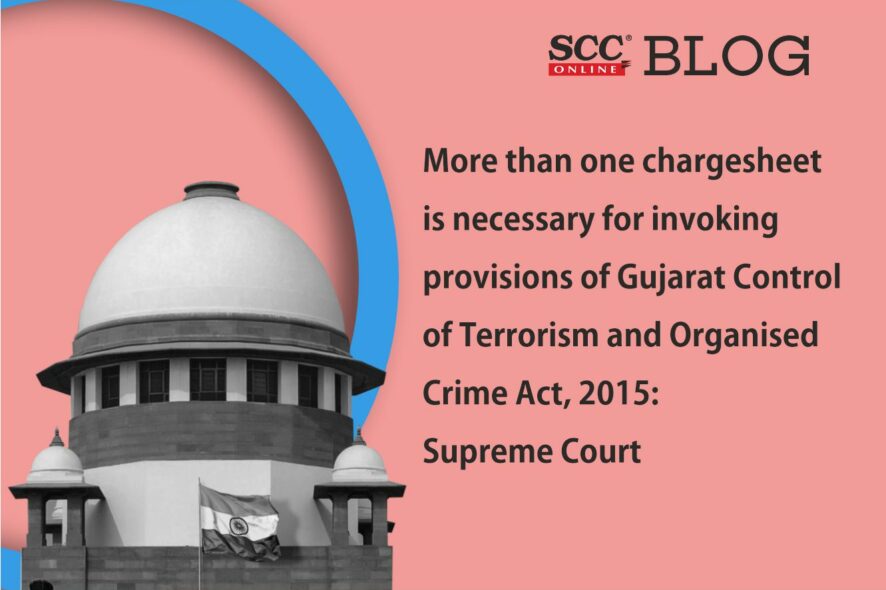 Supreme Court: The Division Bench comprising B.R. Gavai and Hima Kohli, JJ., (Vacation Bench) reversed the order of the Gujarat High Court, by which the applicant was denied the benefit of bail under the Gujarat Control of Terrorism and Organised Crime Act, 2015 (GCTOC Act). The Court held that existence of more than one charge sheet against the accused is essential for invoking the provisions of GCTOC Act.

The applicant contended that for invoking the provisions of the Gujarat Control of Terrorism and Organised Crime Act, 2015 (GCTOC Act) which is analogous to the Maharashtra Control of Organized Crime Act, 1999 (MCOCA), two requirements have to be satisfied, i.e. the activity undertaken is either singly or jointly as a member of an organized crime syndicate or on behalf of such a crime syndicate and that in respect of such an activity, more than one charge-sheet must have been filed in the preceding period of last 10 years.

However, the applicant claimed that in the instant case, the second requirement was not satisfied since the Chart indicating all the crimes registered against the applicant revealed that only FIR 64 of 2021 dated 26-07-2021 was in respect of an activity committed by two members of the syndicate.

Further, to strengthen his case, the applicant submitted that he had already been released on bail in respect of other FIRs and it was only on account of him being implicated in FIR 64 of 2021 under the GCTOC Act, that he was deprived of his liberty.

On the contrary, the State submitted that all the offences alleged in the FIRs which were given in the Chart, were directly or indirectly committed for the benefit of the crime syndicate of which the applicant is a member.

However, in the instant case, only one charge sheet was filed in respect of activity which could be said to have been undertaken by the applicant as a member of an organised crime syndicate on behalf of such syndicate.

In the backdrop of above, and considering the factum that the applicant had already been granted bail in respect of crime registered at Serial Nos. 1 to 5, the Court allowed the instant petition. Accordingly, the applicant was directed to be released on bail with the directions to report to the investigating officer every Monday between 10.00 a.m. to 1.00 p.m and not to attempt to influence the witnesses or tamper with the records.[Mohamad Iliyas Mohamad Bilal Kapadiya v. State of Gujarat, 2022 SCC OnLine SC 713, decided on 30-05-2022]

Utt HC | Freedom can’t be denied just because a person is poor; Court reduces amount of sureties for bail