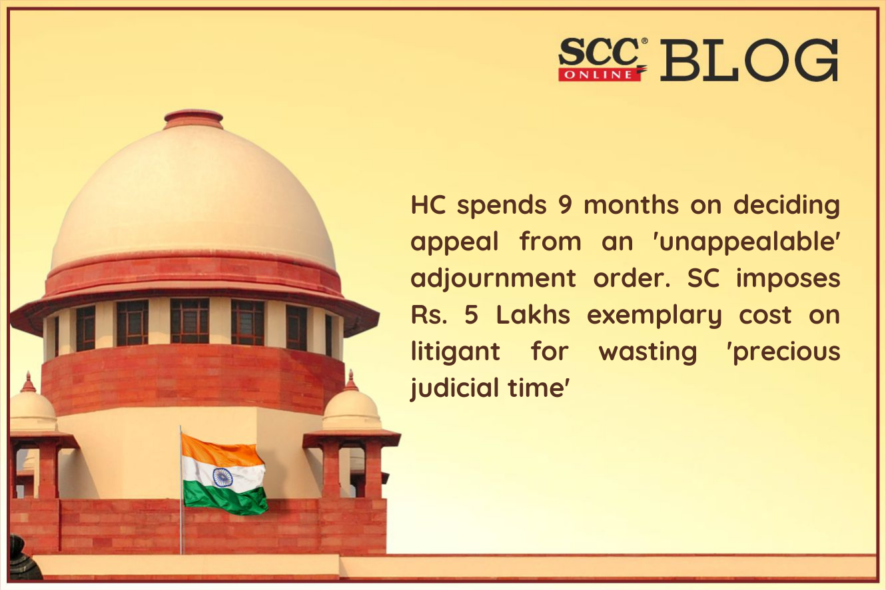 Supreme Court: In a trade mark infringement case where interlocutory injunction was sought during the pendency of the suit, the bench of L. Nageswara Rao and BR Gavai*, JJ, was faced with a strange situation where at first, an adjournment order of the single judge of Calcutta High Court was treated as a ‘judgment’ and appealed against and later on, in appeal, the division bench took in upon itself to dispose of the interlocutory application instead of relegating it to the court below for its disposal because it did not want to prolong the litigation.

The order was postponement of the question as to whether the respondent-plaintiff was entitled to grant of an ad-interim injunction or not, and that too, by merely three weeks.  The order was only giving an opportunity to the appellants-defendants to file their affidavit-in-opposition within a period of two weeks. The order clarified that no prayer for extension of time shall be entertained.

Was it a ‘judgment’?

“As such, the order passed by the learned Single Judge did not contain the traits and trappings of finality. If it is held otherwise, this will open a floodgate of appeals for parties who may even challenge the order of adjournment or grant of time to the other side to file affidavit-in-reply.”

Hence, the said order cannot be construed to be a ‘judgment’ within the meaning of Clause 15 of Letters Patent and as such, the appeal to the Division Bench of the High Court was not tenable.

The Single Judge passed an order on 2nd  April 2019 and the appeal to the Division Bench was filed immediately thereafter in the month of April, though the exact date of filing of appeal is not known. The judgment and order impugned herein was passed after a gap of about 8-9 months from the date of the order passed by the Single Judge.

The perusal of the judgment and order impugned herein would clearly reveal that the counsel for the appellants-defendants had specifically submitted that the appeal was against an ad-interim order and therefore, the appellate court should not interfere by substituting its views but should instead direct a speedy hearing of the interim application of the respondent-plaintiff. The Division Bench of the High Court after recording the said submission, observed thus:

“Before entering into a discussion with regard to the merits of this case I say that all the facts and papers which were necessary for deciding the prima facie case of the parties were before us.  On these facts and evidence we were in a position to assess their respective   prima   facie   case   and   the   balance   of convenience. In those circumstances we propose to dispose of the interlocutory   application   ourselves   instead of entering a prima facie finding and relegating it to the court below for its disposal. That would be unnecessary prolongation of the litigation and utter wastage of time.”

What was wrong with the order?

The Supreme Court could not understand the anxiety on the part of the Division to itself dispose of   the interlocutory application instead of relegating it to the court below for its disposal when it itself took 8-9 months to decide the appeal.

“If the learned Judges of the Division Bench were so much concerned with the prolongation of litigation, they could have very well requested the learned Single Judge to decide the injunction application within a stipulated period. Instead of waiting for a period of 8-9 months, this could have been done by them at the very first instance when the appeal was listed. The hierarchy of the trial court and  the appellate  court  exists  so  that the  trial court exercises its discretion upon the settled principles of law.  An appellate court, after the findings of the trial court are recorded, has an advantage of appreciating the view taken by the trial judge and examining the correctness or otherwise thereof within the limited area available. If the appellate court itself decides the matters required to be decided by the trial court, there would be no necessity to have the hierarchy of courts”

In any event, though the Division Bench of the High Court observes that for deciding the question with regard to grant of interim injunction, it has to put itself in a position as if it was moved to pass an interim order in the suit, it even fails to take into consideration the principles which a court is required to take into consideration while deciding such an application.

The Court observed that it is high time that this Court should take note of frivolous appeals being filed against unappealable orders wasting precious judicial time. As it is, the courts in India are already over-burdened with huge pendency. Such unwarranted proceedings at the behest of the parties who can afford to bear the expenses of such litigations, must be discouraged.

In a narrow majority decision, US Supreme Court affirms that there is no right to class actions under National Labor Relations Act

Man, guilty of burning his pregnant wife and 3-year-old son, not to face death penalty