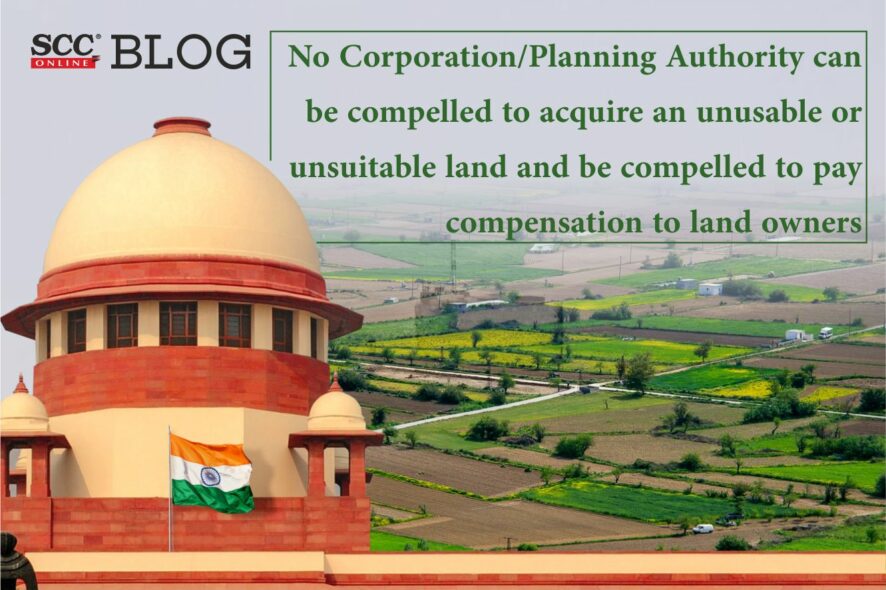 Supreme Court: In a case where the Bombay High Court had directed Kolhapur Municipal Corporation to acquire an unusable land under the Right to Fair Compensation and Transparency in Land Acquisition, Rehabilitation and Resettlement Act, 2013 and compensate the landowners, the bench of MR Shah* and BV Nagarathna, JJ has held that when land is found to be unsuitable and unusable for the purposes for which it has been reserved, Corporation cannot be compelled to pay a huge compensation for such a useless and unsuitable land.

The dispute is with respect to the land ad-measuring 3 Hectors and 65 Ares in Kolhapur. The development plan for the City of Kolhapur was sanctioned on 18.12.1999. Different portions of the land in question were reserved in the sanctioned development plan for various public purposes namely, parking, garden, extension of sewage treatment plant etc. By Resolution dated 18.02.2012, the General Body of the Municipal Corporation resolved to acquire the said property and accordingly on 17.04.2012, a proposal was submitted by the Municipal Corporation to the State Government for compulsory acquisition of the subject property.

However, the subject land is flood affected through which a rivulet named ‘Jayanti Nala’ passes, making it unsuitable for the public purposes for which it was reserved. Further, it was argued that unless and until the substantial development is carried out, the land in question was not usable at all. The reserved area is coming within High Flood Line and every year for a period of fifteen days to one month, the said area gets flooded during rainy season.

As the land in question was not acquired and/or used for the public purposes for which the same was reserved under the sanctioned development plan, the original landowners served a notice under Section 127 of the Maharashtra Regional and Town Planning Act, 1966.

It is also to be noted that the reservation had lapsed as a mere Resolution being passed by the General Body of the Corporation to acquire the land and sending a letter to the Collector to acquire the land, without any further steps being taken under the Land Acquisition Act, namely no declaration under section 6 thereof being issued within a period of one year from the receipt of the said purchase notice, would result in the reservation as deemed to have lapsed.

The Supreme Court observed that once the reservation of land under the Development Plan is deemed to have lapsed by operation of law and it is released from reservation, no writ of Mandamus could have been issued by the High Court directing the Corporation to still acquire the land and to issue a declaration under Section 19 of the Act of 2013 (as in the meantime, the Land Acquisition Act, 1894 has been repealed and Act of 2013 has been enacted).

“Once by operation of law, the reservation is deemed to have lapsed, it is lapsed for all purposes and for all times to come.”

The Court also held that the High Court was not justified in directing the Municipal Corporation to acquire the land in question and to issue a declaration under Section 19 of the 2013 Act and to pay compensation under the Act of 2013 as right from the very beginning it was stated in the counter before the High Court that the land in question was not suitable and/or usable for the purposes for which it has been reserved.

“… as such at the time when the planning was made and the land in question was put under reservation for public purposes, a duty was cast upon the Planning Officer to consider whether the land, which will have to be acquired and for which the compensation is to be paid is really suitable and/or usable for the public purposes for which it is reserved. Otherwise, every landowner will see to it that though his land is not suitable and/or not very valuable, is put under reservation and the same is acquired by the Corporation and/or the Planning Authority and thereafter he is paid the compensation.”

It was, hence, held that no Corporation and/or the Planning Authority and/or the Appropriate Authority can be compelled to acquire the land which according to the Corporation/Planning Authority is not suitable and/or usable for the purposes for which it is reserved. Any other interpretation would lead to colourable and fraudulent exercise of power and cause financial burden on the public exchequer.

Under the Act of 2013, the Corporation was required to pay a huge sum of Rs. 77,65,12,000/- by way of compensation under the Act of 2013. According to the Corporation, when the entire annual budget for acquisition was Rs. 21 crores, it was beyond their financial position and/or budgetary provision to pay such a huge compensation, that too, for the land which is not suitable and/or useable for the purposes for which it has been reserved.

In such circumstances, the Court observed that while under MRTP Act, the financial constraint cannot be the sole consideration to acquire the land for the purposes for which it has been reserved namely public purposes, however, at the same time, when such a huge amount of compensation is to be paid and there would be a heavy financial burden, which as such is beyond the financial capacity of the Corporation, such a financial constraint can be said to be one of the relevant considerations, though not the sole consideration before embarking upon reservation of a particular extent of land for development.

The Court also held that a landowner is entitled to TDR in lieu of compensation with respect to the land reserved provided the land to be acquired is suitable and/or usable by the Corporation. However, once it is found that the land is not usable and/or suitable for the purposes for which it has been reserved, the Corporation cannot still be compelled and directed to acquire the land and grant TDR in lieu of amount of compensation.