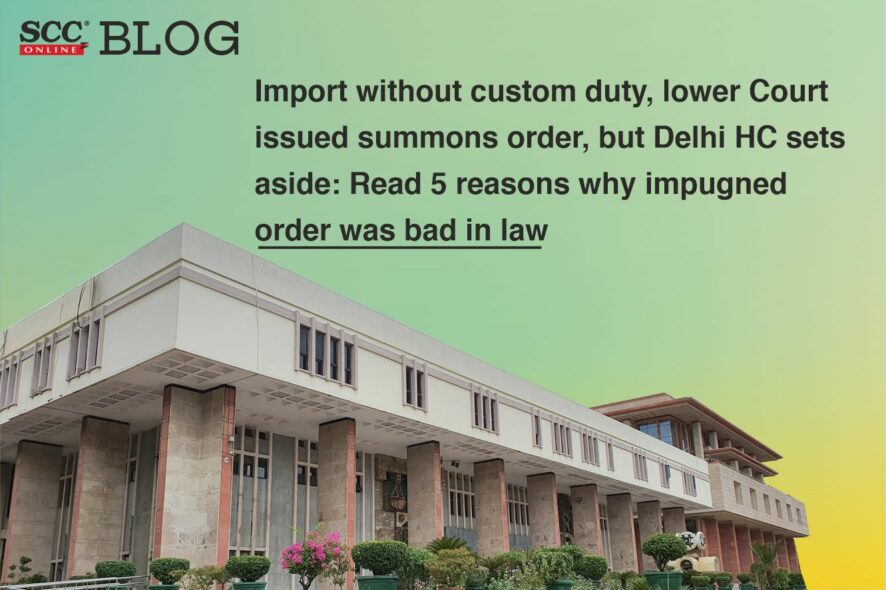 Delhi High Court: Chandra Dhari Singh, J., while setting aside the order of lower Court in a case concerning Customs Act, laid down five reasons why the impugned order was bad in law.

A petition was filed for quashing the order passed by the lower Court.

The respondent i.e. Director of Revenue Intelligence, Head Quarter had filed a criminal complaint case under Sections 132 and 135 (1)(a) of the Customs Act, 1962 before the Trial Court stating that the intelligence reports were received that M/s Elgin Electronics (“the firm”), of which petitioner 1 was the proprietor and petitioner was the Manager were in the business of importing public address systems, sound systems for auditorium etc. without payment of customs duty.

In view of the above-said search was conducted. Later, the goods detained were seized on the reasonable belief that the same had been imported without payment of customs duty.

Further, it was alleged that documents pertaining to retail Invoices raised by the firm were fake and the statement of one of the partners was recorded in which he stated that his firm had executed a project for M/s GAIL for a total amount of Rs 7.46 Crores, out of which work pertaining to audio visual system for Rs 1 crore was outsourced to the firm.

Adding to the above, a retail invoice, recovered from one of the premises of the accused persons, was shown to Ramesh Gupta regarding the sale of mobile phones for Rs 62,25,305/- which was stated to be fake.

Trial Court had issued summons to the accused persons dispensing with the examination of the complainant, who was a public servant at the pre-summoning stage. The Revisional Court had dismissed the criminal revisions, hence the instant petition under Section 482 CrPC was preferred.

In the present case, there was nothing to show that the petitioner made any false declaration or prepared false documents and therefore, he was not liable to be prosecuted under Section 132 of the Act.

High Court found that the Lower Courts did not consider that at the stage of Section 200 CrPC, the exemption could not be given to a public servant who had filed a case in his official capacity, but such exemption was not available with the other witnesses.

Since respondent 1 did not examine even the panch witnesses to prove its case, the Court below had summoned the petitioner without any material on record for prima facie satisfaction.

Why the impugned order was bad in law?

Petitioner was the defendant before the Trial Court. Respondent had filed a suit against the petitioner/defendant for the recovery of a sum of Rs 28, 43, 209.68/.

The claim of the respondent was that it was a well-known manufacturer providing a portfolio of solutions for packaged power, diversified generation, electrical control and safety and energy optimization.

Further the respondent/plaintiff claimed that a running current account was maintained with the petitioner/defendant against which a statement of account/ledger was regularly maintained by it in the normal course of business.

Petitioner/Defendant’s counsel, Deepika Mishra submitted that Trial Court had fallen into error in determining its jurisdiction as it relied on English case law that the ‘debtor must seek the creditor’, whereas it was bound to follow Section 20 of the Civil Procedure Code, 1908.

Section 20 clearly provides that a Court within whose local limits the cause of action, “wholly or in part”, arises, would have territorial jurisdiction to try the suit.

The registered office of the petitioner/defendant was in West Bengal.

Petitioner/Defendant’s counsel submitted that the invoice itself recorded a Kolkata address. The warehouse was also stated to be located in West Bengal and therefore, the goods were neither dispatched from Delhi nor the invoices were raised at Delhi. counsel for the respondent/plaintiff pointed to the “subject to jurisdiction of court of Delhi only” clause in the invoices. There does not appear to have been any demurrer by the petitioner/defendant against this clause.

Hence, in light of Section 20 of CPC, the Court found some strength in the contention of respondent/plaintiff that on the basis of the ‘place of work’ of the petitioner/defendant, as well as the part cause of action of supply of goods, both reflected jurisdiction of the West Bengal courts.

However, the respondent/plaintiff has also claimed that payments were to be received in Delhi and therefore, part cause of action has arisen in Delhi and as such, the clause in the invoices referred to hereinabove did not confer jurisdiction at a place which had no jurisdiction.

In Court’s opinion, the suit could be filed at Delhi and Trial Court had not committed any error in answering the preliminary issue.

Bench stated that, when the part cause of action had arisen on account of the payments made by the petitioner/defendant directly into the bank account of respondent/plaintiff, even if these were not on regular basis, and there is nothing to show that the place of payment had been fixed, even without following the principle that the ‘debtor must seek out the creditor’, it was clear that the Delhi Courts have jurisdiction to try the suit and the invoice does not vest jurisdiction in a court which had no jurisdiction at all.

For the petitioner: Deepika Mishra, Advocate

Customs, Excise and Service Tax Appellate Tribunal (CESTAT): This appeal was filed by Revenue before a Coram of Madhu Mohan Damodhar (Technical Member) and P. Dinesha (Judicial Member) being aggrieved by the impugned order where appeal of assessee was allowed on the ground that unwarranted removal were based on the recorded statements with no corroborative evidence.

Facts leading to the dispute were that assessee was found to have maintained two invoices of same number with different dates and different value but accounting only one of the two. Ms T. Usha Devi, learned Deputy Commissioner on behalf of the Revenue, contended that the assessee had maintained duplicate invoices which on being contested was not rebutted and can be considered as sufficient proof that there was unwarranted activity. Whereas Mr M.A. Mudimannan, learned counsel appearing for the assessee, supported the findings of the Commissioner made in the appeal.

Tribunal was of the view that the duplicate invoices caused difference between physical production quantity in the stock register and that in respect of only the duplicate invoices the unwarranted removal will have to sustain. The adjudicating authority was directed to re-work the demand which was based on duplicate invoice. Therefore, this appeal was partly allowed and partly remanded. [CCE v. A.R. Metallurgicals (P) Ltd., 2019 SCC OnLine CESTAT 81, Order dated 01-05-2019]