The Supreme Court is the Apex Court of the country, it is called the sentinel on the qui vive. However, what if someone is not satisfied with its ruling? What if there is some scope left through a party that can win the case? Under municipal laws, there is no further recourse. However, for cases, under the domain of international law, the concept changes and varies. International courts provide for the further steps that may be resorted to, if a party so wishes. The increasing burden and delay in the courts have led to the emergence of arbitration. Such proceedings are relied upon as they are said to be more compatible and convenient. One of the most long-running cases, the Vodafone case also sought the option of proceeding to the Permanent Court of Arbitration (PCA).

The first instance that took place, in this case, sets back to the year 2007. It was not much obvious that the amendment in the taxation laws in the year 2012 will make the parties proceed to PCA. The cases where the parties are of more than one country, cases are often carried out through arbitration. Recently, in September 2020, the award was passed by PCA in favour of Vodafone Holdings Ltd. as the case was against the Indian Government, it is now of utmost importance that what will be the next step of the Indian Government. The case that is decided by PCA is Vodafone International Holdings BV v. Govt. of India.1

The bilateral agreement between Hutchison Essar Limited (Indian company) and Vodafone International Holdings (VIHBV) (an entity of Netherlands) was signed in 2007, in which a Hong Kong based entity through a series of subsidiaries sold its stake and led to the bilateral agreement. The agreement was a result of holding the shares of Indian company to the Netherlands entity for approximately eleven billion as consideration.

The profit that the Hong Kong entity earned through this deal, triggered the Indian Government, which demanded tax payment by VIHBV for the acquisition of the stake of the Indian company. The tax was being demanded as per Section 195 of the Income Tax Act, 1961. On the failure of payment by the VIHBV, a case was initiated against the company. However, the decision of the Supreme Court2 supported the VIHBV and quashed the order concerning the demand for payment of INR 25 billion by the company.

The proceedings started in the year 2014. However, the Indian Government also filed a suit in the Indian court for restraining Vodafone from initiating arbitration proceedings. However, this did not work, and the arbitration proceedings took place which continued till 25-9-2020. On this date, PCA passed the Vodafone award. The award is controversial and as per reports, Central Government is considering filing an appeal against the said award.

The retrospective amendment that took place in 2012 could have been challenged in India. However, the arbitration proceedings were chosen with the reasoning, that the articles of BIT between India and Netherlands were being violated. Also, the company needed to take this step as it was found that in the year 2016, many of the BITS between India and other countries were terminated by India itself.3

The treaty that was signed between India and the Netherlands stated the “fair and equitable standard”. However, it was noted that the amendment has limited the scope, and this is now available only in limited situations. This has replaced the carte blanche approach.4 However, the articles that are present in the treaty cannot be revoked in such a manner as it will lead to situations that will cause losses to both the parties and further, forms the basis of the treaty.

After the judgment of the Supreme Court in Vodafone case5 in 2012, the Indian Parliament passed the Finance Act, 2012, which gave inter alia to the addition of two clarifications in Section 9(1)(i) of the Income Tax Act (2012 Amendment). The principal clarification explained the importance of the expression “through” which stated that “For the removal of doubts, it is hereby clarified that the expression ‘through’ will mean and incorporate and will be considered to have consistently implied and included ‘by means of’, ‘in accordance of’ or ‘by reason of’. The subsequent clarification explained that ” an asset or a capital asset being any share or interest in an organisation or element enlisted or consolidated external India will be and will consistently be considered to have been arranged in India, if the offer or premium determines, straightforwardly or by implication, its worth considerably from the resources situated in India”.

The 2012 amendment additionally explained that the term “transfer” incorporates and will be considered to have consistently included discarding or leaving behind a resource or any premium in that, or making any revenue in any resource in any way at all, straightforwardly or in a roundabout way, totally or restrictively, wilfully or automatically, via an arrangement (regardless of whether went into in India or outside India) or something else, despite that such exchange of rights had been portrayed as being affected or subordinate upon or moving from the exchange of an offer or portions of an organisation enlisted or consolidated external India.

The amendment was basically acquainted by the Government to plug a hole that existed in the Indian income tax system. While capital increases charge was payable on exchange of resources situated in India, there was vagueness in regard of whether capital additions charge was payable even in situations where an offer buy exchange between foreign entities that did not bring about an immediate exchange of the resources situated in India.

After thirteen years of long and disputed procedure, the award was passed by PCA on 25-9-2020. The award favoured Vodafone and stated that the amount of tax that was demanded by the Indian Government was not payable, as per the treaty. The amount was approx. INR 22,100 crores. The key aspects which form a part of the award are as follows:7

The award is interestingly a complex one, including the emphasis on Article 4(1) of the BIT. Along with the explanation of the BIT, it has also included the scope of India’s legislature and its duty. The order that was passed by the Supreme Court which was sought to be overruled by the amendment has been mentioned as a breach. There has been a similar case in 20118, which was in favour of White Industries and was against India. Also, there have been maritime awards that have been passed in 2014 which were also against India.

The Tribunal has directed India for reimbursing INR 850 million to Vodafone as legal costs. The entire award is not available for the public as it is the choice of parties in arbitration if they want to keep the award public or private. The award seems to be beneficial for India too. The model of BIT has been revised by India. Several clauses of the BIT model have been revised so that no further complications arise when India enters BIT with other countries9.

The matter has been in news and has been also discussed amongst the personnel of the Government. There have been different pieces of information coming out through different sources. The Tribunal has stated the Government has time till 24-12-2020, to send a reply regarding the award. It has been reported the reply of the Centre is not confirmed, as there are two points, and the Centre can rely on any one of them.

The two probable views are related to India’s position for other future BITs or to reserve India’s right of taxation. However, as per media reports, the Solicitor General of India is in support of filing an appeal and Singapore is being chosen as the place of appeal.10 The views are of utmost importance as it will affect the future treaties of India.

Also, the creation of a proper corporate structure is needed which has been revealed through various instances. The cases in which India terminated the BIT are to be considered as a lesson after this case. The revised model of BIT is also being considered as a step that has been taken after the passing of the Vodafone PCA award.

The shift of the case from India to international arbitration shows that the international parties rely more on the proceedings of arbitration. The retrospective amendment which sought to overrule the judgment passed by the Supreme Court led to the inclusion of PCA in the case. It is very important to keep in mind all the points that would affect the position of the country in the outside world. India endeavours and can possibly be a speculator investor-friendly jurisdiction and whether India will have the option to accomplish this objective will rely upon the advances that the public authority will make in its authoritative structure. The methodology of India to venture interventions should be returned to as the current position is indicating an opposite pattern. The endeavours of the public authority and the legal executive cannot be overlooked notwithstanding, regardless of these endeavours, India has not had the option to accomplish its objective of turning into the most favoured destination for investment. A general improvement in the arbitrational environment will positively affect the simplicity of working together which will, in the end, prompt more foreign investments.

The judgment conveyed by PCA will have a material bearing on comparable cases, wherein such issues are included and tax collection from foreign institution investors will be affected because of the Vodafone decision. India is engaged with over twelve comparable situations where review charge cases and retraction of agreements are being referred to and this decision will likewise influence those situations where the duty interest of India is genuine. One may likewise contend that the decision of PCA is a colossal misfortune for India as it included a considerable issue of unfamiliar financial specialists meeting their expense commitments

The award has been passed by the PCA. Now it is important to see what will be the next step that Indian Government will take in order to safeguard its interest. The step that will be taken at this point of time will have an effect in the future treaties too. Such decisions need to be taken after consideration of all the possible situations that can take place. It is also a lesson that before the decisions taken regarding the amendments, the articles of the BIT must be kept in mind. The appeal (as per media reports) is pending, and we need to await whether India will be able to safeguard its interests.

“3.1 No party shall subject investments made by investors of the other party to measures which constitute a violation of customary international law through: (i) denial of justice in any judicial or administrative proceedings; or (ii) fundamental breach of due process; or (iii) targeted discrimination on manifestly unjustified grounds, such as gender, race or religious belief; or (iv) manifestly abusive treatment, such as coercion, duress and harassment. 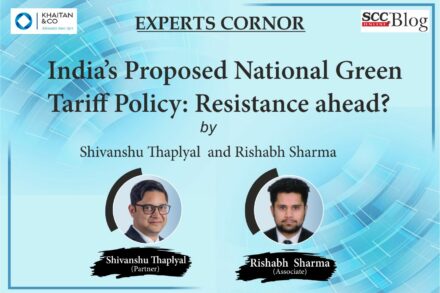 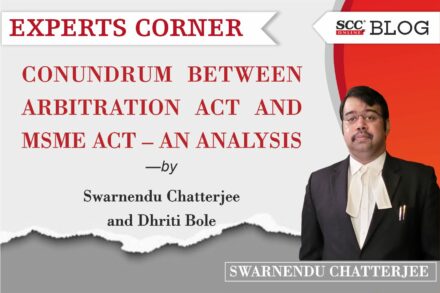 Conundrum between Arbitration Act and MSME Act – An Analysis