Madras High Court: In a writ petition filed for directing the respondents to obtain a declaration from the organisers of all Dusshera Groups and Sound Hire Service Providers to prohibit singing and playing any non-devotional songs and ‘Kuthu Pattu’ during Dusshera festival at Arultharum Mutharamman Thirukovil, Thoothukudi District, the division bench of R. Mahadevan and J. Sathya Narayana Prasad, JJ., has directed the police authorities to prohibit obscene and vulgar dance performance during Dusshera Festival. The Court took note of the photographs of Dusshera festival, filed by the petitioner and observed that show that such dances are performed by paid dancers exhibiting obscene and vulgar postures making mockery of the traditional culture and customs to be followed in Dusshera festival and denigrating the Hindu religious sentiments. Further, portrayal of women in an indecent fashion itself is an offence under the provisions of the Indecent Representation of Women (Prohibition) Act, 1981.

The Court noted that petitioner has initially filed seeking the very same relief for the Dusshera festival of the year 2017 and again in 2018. Wherein the Court has directed the authorities to ensure that there is no display of vulgarity or obscenity in connection with the temple festival of Arultharum Mutharamman.

The Court viewed that the petitioner has produced materials to substantiate his plea of exhibition of obscene and vulgar dance during the earlier Dusshera festival for the years 2017 and 2018. Thus, the apprehension of the petitioner to protect the traditional culture and customs of Dusshera festival from the vulgar and obscene dance performance, is well founded, and directed that the obscene and vulgar dance performance should be specifically prohibited by the Police authorities in the forthcoming festival and if anyone violates the same, appropriate action shall be taken against them in line with the Circular Memorandum dated 09.04.2019 issued by the Director General of Police, Tamil Nadu, that provides consolidated instructions regarding the procedures to be followed while granting permission to conduct cultural events, sports events, procession/meeting etc.

P&H HC | Schools succeeded in hoodwinking CBSE, however, no fault can be attributed to the students; direction for issuance of class 12th result 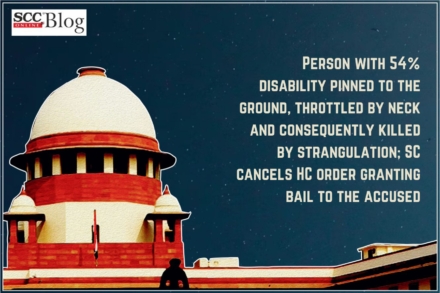 Person with 54% disability pinned to the ground, throttled by neck and consequently killed by strangulation; SC cancels HC order granting bail to the accused