Allahabad High Court: The Division Bench of Devendra Kumar Upadhyaya and Rajnish Kumar, JJ. took cognizance of the PIL which was admitted by the previous order of the Court dated 07-04-2022 which was necessitated on account of the incident reported in the newspapers where some stray dogs not only attacked but killed a boy of very tender age and seriously injured his sister.

The Court had also directed the Chief Medical Officer to provide all medical assistance to the girl by keeping her admitted for treatment in King George Medical University. This Court had further directed that all possible medical treatment shall be given to the injured girl child without any charges. The Court appreciated the efforts of Chief Medical Officer, Lucknow and the Registrar and the Vice Chancellor of KGMU for the same.

The Court in the current hearing called upon Lucknow Nagar Nigam to file separate affidavits as to the legal position and compliance thereof by Nagar Nigam for ensuring the safety of street dogs after an application seeking intervention has been moved by Sri Kamal Sharma through Sri Amal Rastogi regarding the welfare of the animals.

In pursuance to the previous order wherein the Court had asked Additional Advocate General to apprise the District Magistrate, Lucknow about the incident and also to seek instructions as to how the family of the deceased boy child can be monetarily compensated on account of his tragic death in the incident, a letter was produced stating that sanction has been accorded to provide a sum of Rs.1,50,000/- to the family members of the deceased child from Lucknow Rifle Club. However, advocate appearing on behalf of the family members of the deceased child, Mohd. Kumail Haider argued that it is not in dispute that a human life has been lost in a horrifying incident which prima facie occurred on account of negligence in discharge of its duties by Nagar Nigam. If State or any of its instrumentalities fails to discharge its statutory or otherwise obligations and duties which becomes the cause of loss of human life, though such life cannot be compensated in any terms including in terms of money, however, surviving family members of the deceased are necessarily to be provided some solace by way of monetary compensation or otherwise.

The Court considering the argument directed the Lucknow Nagar Nigam to file an affidavit stating as to why adequate compensation of Rs. 10,00,000/- may not be awarded to the family of the deceased child. The Court also requested the amicus curiae Vijay Dixit, Abhishek Pratap and Mohit Pandey to give a written brief as to why and under what provision of law the family members of the deceased child can be compensated monetarily. 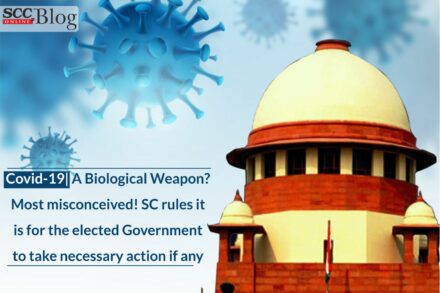 COVID-19| A Biological Weapon? Most misconceived! SC rules it is for the elected Government to take necessary action if any