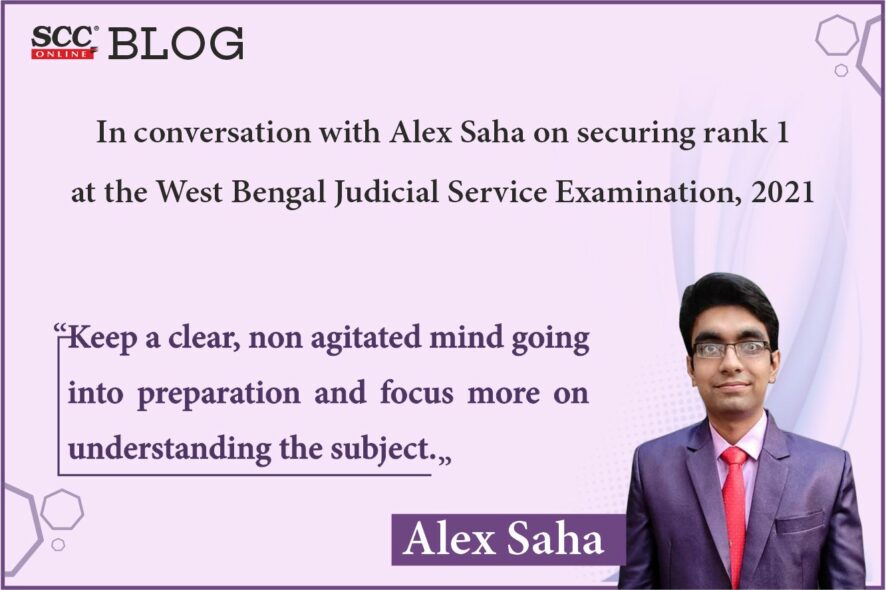 Alex Saha is a graduate from WBNUJS, Kolkata, and after a breif period of wokking as a corporate lawyer, he decided to take up judicial services and has been ranked 1 in the West Bengal Judicial Service Examination, 2021.

He has been interviewed by Radhika Ghosh, EBC/SCC Online Student Ambassador who is currently pursuing law from HNLU, Raipur.

Thank you for the wish. I am Alex. I am a resident of the Hooghly District in West Bengal. My father is an Assistant Public Prosecutor and my mother is a housewife. Due to the transferable nature of my father’s job, I had to switch between several schools in my childhood but I appeared in my ICSE and ISC examinations from Holy Home, Serampore. I got 96% in my ICSE and for ISC; I chose the science stream and received 92% in it. After my ISC, I took preparation for CLAT and was eligible to be admitted into my dream university, WBNUJS. I graduated in the year 2020. I enjoy swimming, playing cricket, snooker, table tennis and watching movies, sports, animes and TV series. Apart from it, I like collecting and spending my time in story books.

Although mathematics was one of my favourite subjects in school days, my curiosity about the subject law overpowered me to choose it as my graduation course. As a child, law intrigued me as I could see people redressing their grievances and settling their disputes amicably by resorting to law. I remember expressing my utter surprise when I first learnt that a 150-year old legislation governs the definitions of offences as well as their punishment even today. Law thenceforth became a subject of curiosity and the more I read it during my preparations for CLAT and at NUJS, the more curious I became. I believe this curiosity has resulted in me a thirst for knowing more and thus I was drawn towards law.

My interest in being a part of judiciary was not a natural byproduct of studying law. When I entered NUJS, I had no specific career trajectory in mind and I wanted to explore the various possibilities of a career choice. During my internships, I was lucky to get couple of internships with retired Justice Adarsh Kumar Goel of the Supreme Court and Justice Joymalya Bagchi of the Calcutta High Court. These internships led rise in me a yearning to join judiciary. Additionally, I wanted to take a path not trodden upon by anyone in my family before. Judiciary was completely a new territory to me and thus there was an element of thrill in being a part of judiciary and making a name for myself in it.

During my first year at NUJS, it was tough for me to adapt to the new approach of studying and writing answers, given the fact that I was coming from science stream where I had to answer objectively and mostly in a couple of sentences. But the inquisitive atmosphere prevalent there and the general sense of competition that one perceives made me work harder in order to adjust to the new normal. From my second year onwards, it felt completely natural and I was able to focus on internships, mooting and other co-curricular activities. I tried myself at various things in order to ascertain my interests. I did a couple of moot courts, co-authored one research paper, participated in intra-university debates and a lot of varied internships ranging from litigations to judicial clerkships to law firms. Trying these varied activities made me certain about my future trajectory and I had made up my mind that my ultimate goal was to be a part of the judiciary.

NUJS provided me the opportunity to interact with a number of highly knowledgeable and respected professors; assistant professors who could make you fall in love with their subjects. They were eager to teach more and also exerted us to learn more and be more inquisitive. They were approachable not only when we had queries pertaining to their respective subjects but we could also approach them in regards to any problems we might be facing. Additionally, I was lucky to have many invaluable friends, seniors and juniors who were constantly motivating me to become better. NUJS also had specialised committees to look after the different trajectories of a law student. One such committee was the Civil and Judicial Examinations Committee which ensured that civil and judicial services aspirants got reliable notes free of cost. There were also seminars where reputed and famous personalities were invited for sharing their thoughts and insights and with whom we could personally interact and clear any doubts. This cumulative atmosphere was one of the most essential things that helped me fortify my base in order to appear for WBJS. I could not have had a better dream university to study from.

Internships, I believe, are essential not only to develop the skills and knowledge but also to choose where your interests lie. In my first year I interned under lawyers of the District Court and High Court, whereby I became acquainted with the profession of litigation. I interacted with various other lawyers during those internships and could accumulate their learned opinions, knowledge and ways to get myself adept at the profession. In my second and third year, I interned under Retd. Justice Adarsh Kumar Goel and Justice Joymalya Bagchi wherein I was able to develop my profound respect and yearning to join judiciary. In my third and fourth year, I did law firm internships and although it was something most of my peers were focussing on, I could not bring myself to view it as my ultimate career choice. Thus I was able to explore these many career options and take a considered and well-explored decision of my ultimate career choice. There was no room for second-guessing my choice as I had already seen and lived through them during my internships.

Although I had chosen my career trajectory, I did not start preparing for this examination till after I had graduated. The reason was that I was ineligible to appear in WBJS due to the minimum age limit requirement of 23. I had to wait a year and it was then that I began my preparation. I had around 6 to 8 months to prepare and thus, I thought given the time constraint, I had to keep the process simple and methodical. So, I only filled up the form of WBJS and of no other examination as I could not divide my time and attention among different examinations in the limited time.

For law subjects, I read the Bare Acts minutely and the notes already provided by NUJS. After completing a subject, I used to check the efficacy of my preparation by solving previous year question papers. Once I was satisfied, I used to move onto the next subject. Given the paucity of time, I planned on giving the least time to English and Bengali as I knew the languages well and judging by the past year papers, I merely had to write opinions on various topics. For GK/CA, I prepared from freely available online resources primarily. In the initial phase my preparation was mains oriented and only in the preceding month to prelims that I started practising MCQs. I devoted an entire month solving only MCQs. Post prelims, I revised all the law subjects 3 to 4 times and for interview, I stuck to revising the basic concepts of the laws that I had already read for mains.

My parents were my biggest motivators. They made sure that I did not accumulate stress by thinking too much of the exam and my future. They encouraged me to maintain a clear head during the process of preparation. Added to that, my friends also used to encourage and boost me to do and prepare better. Whenever, I needed breaks, I used to scroll social media or watch movies or sports.

The first hurdle that I faced was to allay the fears in regards to my future. The intense competition added to the limited number of vacancies available used to unnerve me at times. Moreover, I did not have a backup option if I failed to clear WBJS as I had not filled forms for any other examination. Thus I had to insulate my mind from these negative thoughts and during those phases, I used social media, movies, TV series, animes or sports. Another hurdle was to convince myself as to the sufficiency of materials I was studying from. I did not take any professional guidance as to which notes or books to consult or which strategy to follow. I did not watch any interviews of previously successful candidates and thus, the efficacy of my process and my materials used to haunt me at times. I allayed this fear by reminding myself of the fact that time was limited and thus too many notes or books were not a viable option. Moreover, since it was my first attempt, I could afford not availing professional guidance or consulting previously successful candidates.

Judging by the past year papers, I realised that self-study would be sufficient for me. I wanted to keep the process simple and too many opinions would have detracted and confused me. I therefore insulated myself from seeking or hearing such opinions. Moreover, I had couple of more attempts during which I could have consulted or sought the professional guidance and therefore, I relied completely on my understanding of the needs of the examinations for my first attempt.

I think this is not the correct time for me to answer this. I need to first experience the judicial system by becoming its part and then could give my considered opinion on it. If I say anything now, it will be a complete hearsay which I better avoid relying on.

The first thing to know is this every aspirant has their own strengths and weaknesses. So the first thing to be done is to understand one’s strengths and weaknesses. You have to work hard on your strengths so that they do not become fragile and you have to work harder on your weaknesses so that they become your strengths. Also, do not follow the preparation strategy of someone else blindly. The needs and requirements are different for different aspirants and when you prepare a strategy, see whether that will be beneficial to you and that it makes sense to you. The notes you study from does not matter as long as you understand the law and the subject. If you try to second-guess your strategy every moment then that will make your concentration lapse. Keep a clear, non-agitated mind going into preparation and focus more on understanding the subject. Be honest and consistent with your preparations. Keep negativity and stress aside by taking sufficient breaks to charge your mind. 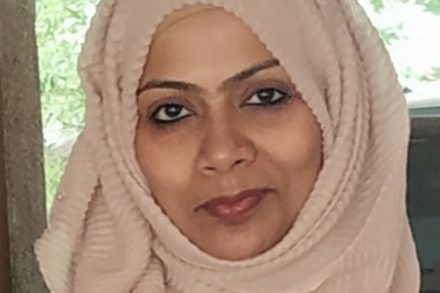 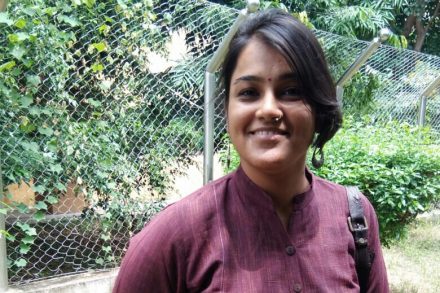 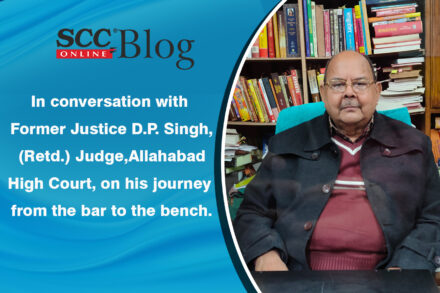 In conversation with Former Justice D.P. Singh, (Retd.) Judge, Allahabad High Court, on his journey from Bar to Bench