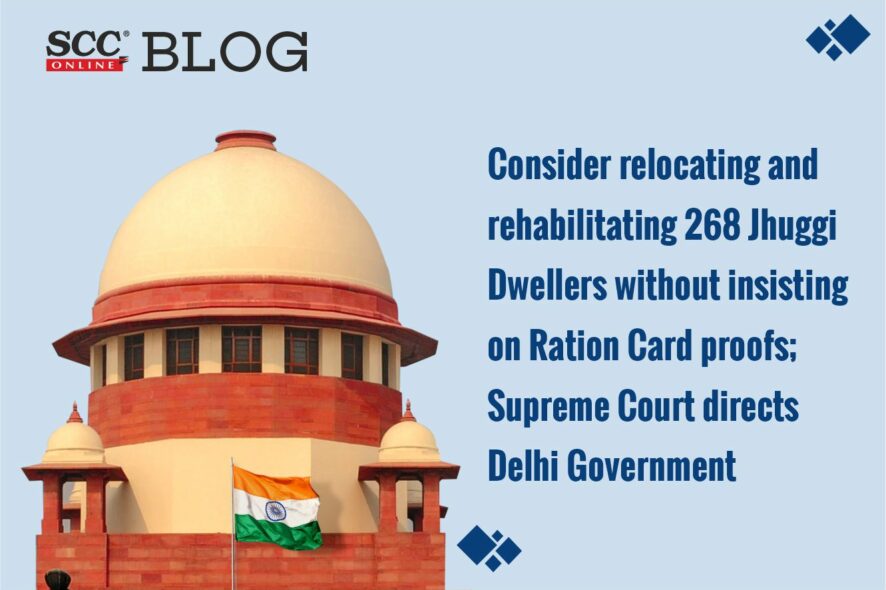 The appellant, Rajiv Camp, Saidabad had approached the Delhi High Court with a request to issue writ of mandamus for directing the NCT of Delhi to allot plots to the beneficiaries of Rajiv Camp in terms of policy guidelines for the implementation of the scheme for relocation/rehabilitation and allotment of plots to slum and JJ dwellers.

By the impugned order, the Delhi High Court had held that since the original cut-off date was 31-12-1998, the jhuggi dwellers were not eligible for the rehabilitation scheme at that date as they did not have ration card on the relevant date. The High Court observed that there was nothing in the office orders dated 16-7-2010 and 03-02-2011 to show that they had a retrospective operation.

However, on receipt of the verification report from the Food and Supply Department, it was found that not even a single person was found entitled to relocation/rehabilitation. Since, as per the policy, jhuggi dweller families having ration cards issued up to 31-12-1998 were only eligible for relocation. In the instant case, none of the families were found in possession of ration cards issued up to 31-12-1998.

The appellant urged that the dwellers had made representations pointing out that they had been living at the existing site for more than 20 years and had valid claim/proof of their existence. Therefore, the appellant was claiming the benefit of the order dated 16-7-2010 and 03-02-2011 issued by the Govt. of NCT of Delhi, Urban Development Department which extended the cut-off date from 31-12-1998 to 31-03-2002 for allotting flats for rehabilitation/relocation. Further, by the order dated 03-02-2011 the cut-off date was extended from 31-03-2002 to 31-03-2007.

The Board was directed not to reject the applications on the ground that Ration Cards and other data is not available. Additionally, the authorities concerned were directed to consider the representation made by the Jhuggi Dwellers on the basis of the evidence produced by them in accordance with the aforementioned guidelines/policy and pass orders within a period of four weeks.[Rajiv Camp Saidabad v. State (NCT of Delhi), 2022 SCC OnLine SC 721, decided on 19-05-2022]

“Dark satirical comedy, attempting to expose ills of various professions”; Del HC refuses to restrain streaming of web series ‘Hasmukh’ as it would be against Art. 19(1)(a)