Chhattisgarh High Court: The Division Bench of Goutam Bhaduri and Sanjay S Agarwal, JJ. directed that the State shall ensure that the Appellate Tribunal shall be made functional so that the grievance of the public at large who are affected are redressed.

The facts of the case are such that the appellants herein are the Builders/ Colonizers/ Developers, the private respondents who purchased the plots filed a complaint before the Real Estate Regulatory Authority (for short “RERA”). The private respondents, they purchased plots in a project known as Anandam World City, Kachna on different dates and wanted to construct houses, but it was objected by the builders and a demand was made for infrastructure developments fees. Apart from that, the development work in the Colony i.e. Walkway, Fire-station, Open Area, Temple, Development of Pond, Garden, Other amenities of the Retail & Business Shops, Hospital, Amphitheater, Supermarket, Multiplex, ATM, Library, Doctor, Kids’ Play Area was not provided. The boundary wall also remained incomplete and the roads were without street lights whereas in the brochure and the advertisement, all the amenities were promised to be provided. Thus, a petition was filed before RERA which came to be dismissed. Being aggrieved, an appeal was preferred before the Appellate Tribunal who remanded the case with certain directions and RERA was directed to get the area inspected by an Architect to evaluate whether development work was carried out or not and further direction was given that issue about payment of development/user charges in absence of agreement non-execution of the agreement be referred to the adjudicating authority and the grievances of the private homebuyer were directed to be decided afresh. Being aggrieved by the said order of the Appellate Tribunal, instant appeals were filed.

Counsel for the appellant submitted that the order passed by the Single Member Committee would be without jurisdiction, as it would be against the spirit of Section 43(3) read with Section 45 RERA Act, 2016 i.e Act of 2016. He further submits that the order further directing the adjudicating authority to decide the complaint would also be illegal, as adjudicating authority appointed under section 71(1) of the Act of 2016 is only empowered to order for compensation.

Counsel for respondents submitted that the power was exercised by the State Transport Appellate Tribunal who was vested with the power to exercise power of Appellate Tribunal and the order dated 08-12-2020 whereby remand was made, contains two fold direction (i) for the Architect to see the development and compare it with promise (ii) to deliberate the user charges to be paid in absence of any agreement by Adjudicating Authority and after hearing the parties may pass an order. Therefore, virtually no orders have been passed, which is contrary to the Act of 2016.

Issue 1: Whether the power exercised by the single member Appellate Tribunal of STAT would be valid under the RERA and within jurisdiction?

The Court further observed that reading of the proviso clause do not contemplate that Appellate Tribunal cannot be of a single member and was constituted under the Motor Vehicles Act, 1988, therefore, would have the jurisdiction.

The Court further observed that the designation of STAT, which is of a single member was only for a transitory period while the Tribunal constituted under the Act of 2016 is required to be done under section 43(3) of the Act of 2016. The proviso clause is qualified with the word that the designation to any other Appellate Tribunal can be functioning under any law for the time being enforce can exercise the power. Therefore, that qualified exception would bring it out the necessity of section 43(3) read with section 45 of the Act of 2016, wherein certain numbers of members are required to complete the constitution of forum i.e. Judicial & Technical/ Administrative Member.

The Court observed that the direction given by the Tribunal is two fold, first direction contains that an Architect should be appointed either of RERA or with the consent of both the litigant an inspection be carried out about the development done by builder and that the litigants be given the chance of hearing and produce evidence. Thereafter the second part of direction contains that with the consent of both the parties/ litigants, different development and infrastructure charges which are required to be levied may be decided in absence of agreement of same.

The Court further observed that reading of section 71(1) of the Act of 2016 would show that the power of adjudicating officer is to adjudicate compensation. As a necessary corollary to decide the quantum of compensation, the adjudicating officer may hold an inquiry after giving a person concerned reasonable opportunity of being heard to find out the degree of development to be carried out. The said appointment of the adjudicating officer is also in conformity to the object of the legislation to decide the compensation. The order of the Appellate Tribunal is for appointment of Architect and makes an inspection in respect of development carried out. The order further contains to decide the quantum of infrastructure/ user charges in absence of agreement and thereafter to decide the modus of agreement i.e. charges to be paid in absence of any infrastructure development agreement. We are of the opinion that both the amalgamated direction passed by the learned Tribunal would be against the spirit of section 71 Act of 2016. The first part of the order whereby it has been directed that the Architect may be appointed to evaluate the development carried out and both the parties may be given opportunity would fall in line with the object of section 71 Act of 2016, which may eventually lead to decide a quantum of compensation qua the existing development as against the promise made to buyers at the time of floating of scheme. The second part of the direction that a mutual settlement may be arrived for execution of the agreement for user charges is not contemplated under section 71(1) of the Act of 2016. Therefore, the second part of the order to arrive at a mutual decision for agreement and development charges cannot be done by the adjudicating officer, as such, that part of order cannot be sustained being beyond the powers conferred under section 71(1) of the Act of 2016.

The Court held “the question of law is answered that the remand of the case to the adjudicating officer other than to decide the question of compensation is held to be without jurisdiction.”

The Court directed “It is expected that the Real Estate Appellate Tribunal shall be made functional with all infrastructure within a short span of time to redress the grievance of the aggrieved.” [Gold Bricks Infrastructures Pvt. Ltd. v. Atit Agrawal, 2022 SCC OnLine Chh 849, decided on 06-05-2022] 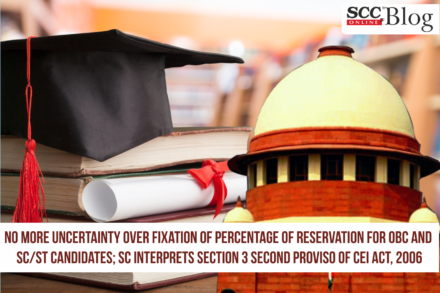 No more uncertainty over fixation of percentage of reservation for OBC and SC/ST candidates; SC interprets Section 3 Second Proviso of CEI Act, 2006

Tri HC | Purpose of demand notice under S. 138 NI Act – not to demand payment, but to inform the party of broken contract and liability to pay