The Supreme Court found it unsustainable, both, on law as well as on facts as an injunction cannot be issued against a true owner or title holder and in favour of a trespasser or a person in unlawful possession.

In a given case, the plaintiff may succeed in getting the injunction even by filing a simple suit for permanent injunction in a case where there is a cloud on the title. However, once the dispute with respect to title is settled and it is held against the plaintiff, in that case, the suit by the plaintiff for permanent injunction shall not be maintainable against the true owner. In such a situation, it will not be open for the plaintiff to contend that though he/she has lost the case so far as the title dispute is concerned, the defendant – the true owner still be restrained from disturbing his/her possession and his/her possession be protected.

Applying the said principles to the case at hand, the Court observed that once the defendant was held to be the true and absolute owner pursuant to the registered sale deed executed in his favour and the plaintiff was unsuccessful so far as the declaratory relief is concerned, thereafter, it cannot be said that there was a cloud over the title of the plaintiff and/or even the defendant. Therefore, the only relief which survived before the trial court was the consideration of relief of permanent injunction and having been unsuccessful in getting the relief of cancellation of the registered sale deed and the declaration thereof, the relief of permanent injunction could not have been granted by the trial court as well as by the first Appellate Court. The Court observed that the Gujarat High Court lost sight of this aspect in the second appeal.

The Court noticed that the High Court had not properly appreciated the distinction between a substantive relief and a consequential relief as it had held that in the instant case the relief of permanent injunction can be said to be a substantive relief. Finding this view to be erroneous, the Court explained that the main reliefs sought by the plaintiff in the suit were cancellation of the sale deed and declaration and the prayer of permanent injunction restraining defendant from disturbing her possession can be said to be a consequential relief. Therefore, the title to the property was the basis of the relief of possession.

The Court, hence, found that all the Courts below erred in granting permanent injunction in favour of the plaintiff and against the defendant, who is the true owner. It is to be noted that the Supreme Court is usually slow in interfering with the concurrent findings of the Courts below. However, in the case at hand, the Supreme Court reversed the findings of three Courts i.e. the Trial Court-decree, First Appellate Court, and the High Court. 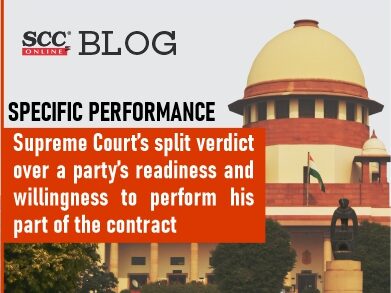 Kar HC | Statement in presence of doctor to police officer cannot be discarded at stage of investigation; bail rejected

MP HC | Provision for redressal of grievance in matter of radiation by mobile tower exists; Permission for installation can’t be revoked