National Consumer Disputes Redressal Commission, New Delhi (NCDRC): While addressing a case wherein there was a delay of 6 years in handing over the possession to the buyer, the Coram of Dr S.M. Kantikar (Presiding Member) and Binoy Kumar, Member, held that in view of catena of Supreme Court decisions on the said issue, the buyer was entitled to get legal possession along with compensation.

An appeal was filed under Section 51(1) of the Consumer Protection Act, 2019 against the decision of the State Consumer Disputes Redressal Commission Uttar Pradesh, whereby the complaint filed by the appellant/complainant was partly allowed.

Respondent/OP was engaged in developing a township and a flat was allotted to Anish Singhal who paid a sum of Rs 1,50,000 to the respondent/OP as a booking amount.

For a total price of Rs 18,21,763, the flat buyer agreement was signed and executed by all the parties. As per the agreement/contract, possession of the flat was to be given within a period of 18 months.

Appellant/Complainant had paid more than 50% of the total consideration as per the construction linked payment plan to the respondent/OP, but even after 6 years the said flat was not handed over.

On being aggrieved with the acts of respondent/OP, the appellant/complainant filed a complaint before the District Forum which was dismissed due to lack of pecuniary jurisdiction.

Commission expressed that appellant/complainant cannot wait for an indefinite time as he had invested heavily his hard-earned money with the intention to get legal possession of the flat.

Further, it was added that since the said agreement was a valid legal document, possession should have been given in 18 months i.e. by May, 2013 or by November, 2013 if the grace period of 6 months was added.

Coram found that there was a delay of about 6 years by the respondent/OP in obtaining the Occupancy Certificate and offer of possession. The reason for the delay was also unexplained.

Therefore, the appellant/complainant was entitled to get legal possession of his flat with reasonable compensation for the delay. [Ved Prakash Aggarwal v. Logix City Developers (P) Ltd., 2022 SCC OnLine NCDRC 35, decided on 22-2-2022]

For the Appellant: In Person

For the Respondent: Binoy Kumar, Member 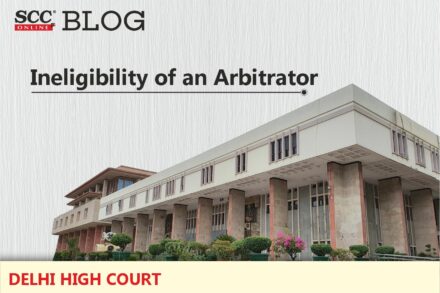 If arbitrator’s son was married to niece of one of parties, would that be described as a close family relationship resulting in ineligibility of Arbitrator by virtue of S. 12(5) of the A&C Act? Del HC examines