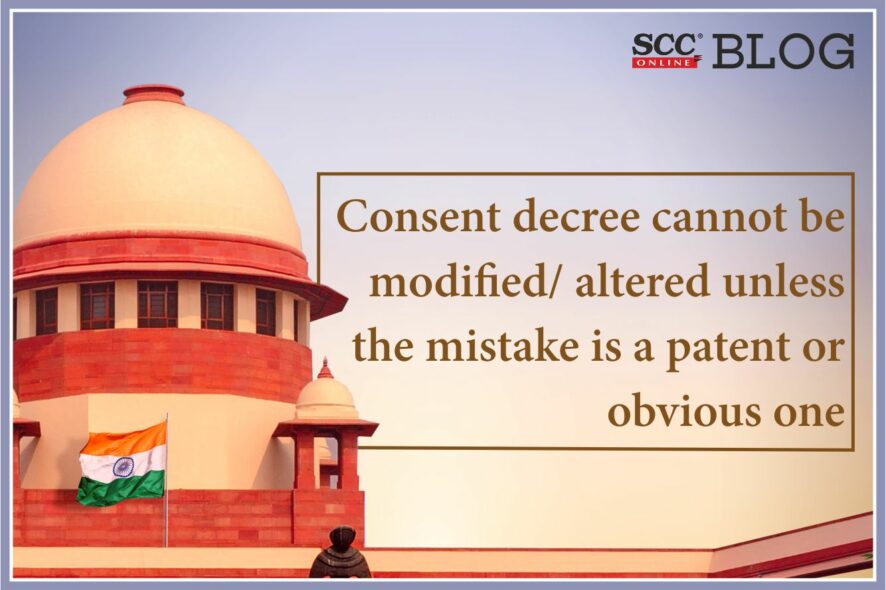 Supreme Court: The bench of MR Shah* and BV Nagarathna, JJ has held that a consent decree cannot be modified/ altered unless the mistake is a patent or obvious mistake.

The Court said that if held otherwise, there is a danger of every consent decree being sought to be altered on the ground of mistake/ misunderstanding by a party to the consent decree.

The Case pertains to ORPAT and CASIO scientific/Electronic calculators.

The Court explained that a judgment by consent is intended to stop litigation between the parties just as much as a judgment resulting from a decision of the Court at the end of a long drawnout fight. A compromise decree creates an estoppel by judgment. However, a consent decree would not serve as an estoppel, where the compromise was vitiated by fraud, misrepresentation, or mistake. The Court in exercise of its inherent power may rectify the consent decree to ensure that it is free from clerical or arithmetical errors so as to bring it in conformity with the terms of the compromise. Undoubtedly, the Court can entertain an Application under Section 151 of the CPC for alterations/ modification of the consent decree if the same is vitiated by fraud, misrepresentation, or misunderstanding. But a consent decree cannot be modified/ altered unless the mistake is a patent or obvious mistake.

In the present case, the Court observed that the misunderstanding as projected by the Appellant between parties relates to use of “FX” or “991” as separate marks in the Settlement Agreement. The understanding between the parties was with respect to “FX-991ES PLUS” as a whole and not with reference to “FX”. A close scrutiny of the correspondence between the parties showed that the Settlement Agreement was arrived at after detailed consultation and deliberations. Thereafter, the parties were communicating with each other and they took six months to arrive at a settlement. The final Settlement Agreement was approved by the mediator.

The High Court applied its mind and passed a decree in terms of the Settlement Agreement dated 16.05.2019.

There is no allegation either of fraud or misrepresentation on the part of the Respondent. The Court disagreed with the Appellant that there was a mistake committed while entering into a settlement agreement due to misunderstanding.

“Correspondence between the advocates for the parties who are experts in law would show that there is no ambiguity or lack of clarity giving rise to any misunderstanding. Even assuming there is a mistake, a consent decree cannot be modified/ altered unless the mistake is a patent or obvious mistake. Or else, there is a danger of every consent decree being sought to be altered on the ground of mistake/ misunderstanding by a party to the consent decree.”

Del HC | Whether disability of an appointing authority to appoint an arbitrator frustrate the arbitration agreement. HC unravels in light of Arbitration and Conciliation (Amendment) Act, 2015