Kerala High Court: In an interesting case the Division Bench of A.Muhamed Mustaque and C.R. Sophy Thomas, JJ., held that not taking treatment for mental illness in order to bring out a peaceful and harmonious family atmosphere can also be counted as cruelty to the persons at the receiving end. Upholding the Family Court’s order granting divorce on the ground of cruelty, the Bench remarked,

In the instant case, the husband, who was an Engineer cum Yoga Trainer approached the Family Court to dissolve marriage under Section 10 of the Divorce Act, alleging cruelties, both mental and physical, and desertion, from the part of the wife, who was a Post Graduate. The husband was alleging that, from the very inception of marriage, the wife was showing behavioural disorders. She was intolerable even on minor domestic problems and she was abusive and assaultive in nature. She often threatened the husband that she would slice his throat and even strangulated him during sleep. Whenever he did not accede to her demand for unnatural sex, she threatened to slice away his penis. She often threatened him with suicide, and once she jumped out of a running car. She went out of the house during night hours without informing the husband, and there was occasion to bring her from street during midnight.

It was further the case of the husband that in spite of being taken to various psychologists and psychiatrists, his wife was not co-operating with the treatment. In July 2005, she went to her paternal house and never came back to live with her husband and children.

Findings of the Family Court

On analysing the facts and evidence, the Family Court found that the husband could establish the grounds of cruelty and desertion against the respondent-wife, and so, the O.P was decreed dissolving the marriage.

Challenging the said judgment and decree, the wife had come up in the instant appeal alleging that, by the impugned judgment, the husband was given an incentive for his own cruelty and desertion. The Family Court ought to have found that she had never intended to terminate her matrimonial life with the husband. In fact, she was prevented from entering her matrimonial home by an injunction suit filed by the mother-in-law.

Relying on the decision of the Supreme Court in Samar Ghosh v. Jaya Ghosh, (2007) 4 SCC 511, the Bench stated that in matrimonial life, cruelty can be defined in many ways; it has many perspectives which depend upon the socio-economic status and circumstances of parties to the marriage. With regard to the allegations made by the husband the Bench made following observations:

One may suffer mental stress or strain due to very many reasons. But, not taking treatment for the same in order to bring out a peaceful and harmonious family atmosphere also may have to be counted as cruelty to the persons at the receiving end. The appellant has no case that, she had any difficulty to continue the treatment, but according to her, she had no psychiatric problem and so she discontinued the treatment.

In A: husband v. B: Wife, 2010 SCC OnLine Ker 4925, it had been held that law cannot recognise different varieties of cruelty as Hindu cruelty, Muslim cruelty, Christian cruelty or secular cruelty to justify a decree for divorce and matrimonial cruelty must have a uniform definition or conceptualisation to justify the founding of a decree for divorce. Further, under S.10(1)(x) of the Divorce Act, the cruelty must be such as to cause reasonable apprehension in the mind of the petitioner, spouse that it would be harmful or injurious for the petitioner to live with the respondent.

From the available facts and evidence, the respondent husband had amply proved that the appellant had treated him with such cruelty as to cause reasonable apprehension in his mind that it would be harmful or injurious to him to live with the appellant and that his children were also anxious to save the life of their father as the children deposed that if the appellant and respondent were again put together, they will lose their father. Further, from the evidence on record following circumstances were proved against the appellant wife:

Hence, considering the fact that the parties lived separately for the last more than 16 years, the Bench held that their marriage was to be treated as a deadwood which had no signs of life. In the result, the appeal was dismissed and the impugned judgment and decree were upheld. [Mary Margret v. Jos P Thomas, Mat. Appeal No.1119 of 2015, decided on 21-01-2022] 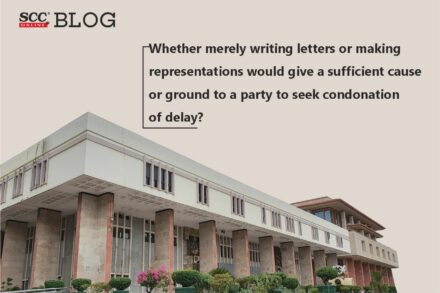 Whether merely writing letters or making representations would give a sufficient cause or ground to a party to seek condonation of delay? Del HC answers