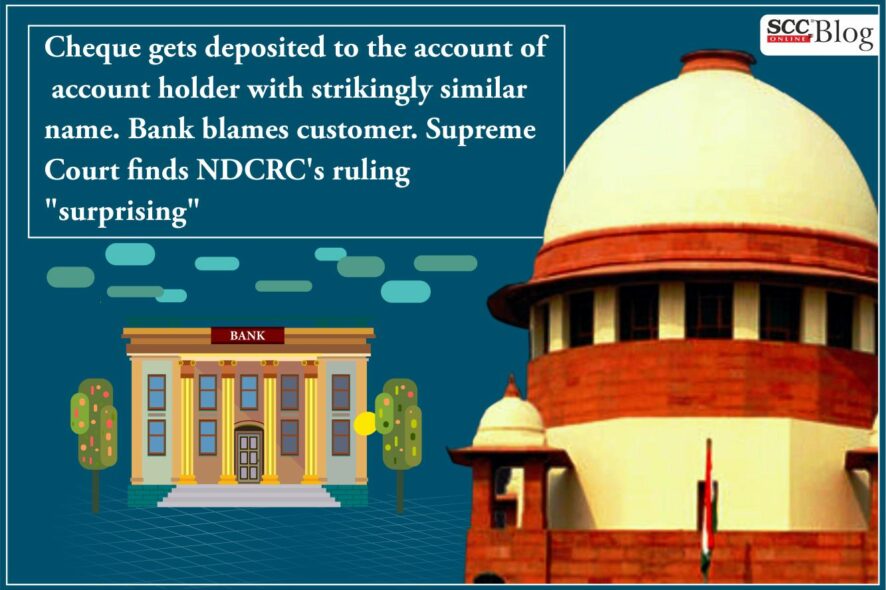 Supreme Court: In an interesting case where one SBI account holder was left with a balance of Rs. 59/- only in his account due to the existence of another bank account with strikingly similar name in the same branch, the bench of Sanjiv Khanna and Bela M. Trivedi*, JJ has set aside the “highly erroneous” impugned order passed by the National Consumer Disputes Redressal Commission solely relying upon the suo-moto report called for from SBI during the pendency of the revision application.

When the matter reached the National Commission, it not only sought for a report from SBI at the revisional stage but set aside the findings and conclusion recorded by the District and State Forum, simply based on this report. The report indicated that the bank had every reason to believe that wrong account number was intentionally inserted by the appellant himself for reasons best known to the appellant or on account of negligence by the appellant by not keeping the passbook in his safe and proper custody.

Explaining the scope of the revisional jurisdiction of the NCDRC under Section 21(b) of the said Act, the Court held that the same is extremely limited. It should be exercised only in case as contemplated within the parameters specified in the said provision, namely when it appears to the National Commission that the State Commission had exercised a jurisdiction not vested in it by law, or had failed to exercise jurisdiction so vested, or had acted in the exercise of its jurisdiction illegally or with material irregularity.

In the instant case, the Court noticed that the NCDRC itself had exceeded its revisional jurisdiction by calling for the report from the bank and solely relying upon such report, had come to the conclusion that the two fora below had erred in not undertaking the requisite in-depth appraisal of the case that was required.

The Supreme Court was at a loss to understand as to how the NCDRC could have sought for a report at the revisional stage, that too from an officer of the party which already had an opportunity to submit all the documents necessary for the purpose of defending itself before the Consumer Forum, and as to how such a report in the form of an additional evidence produced at the revisional stage could be relied upon, in respect of which the two fora below had no opportunity to deal with.

Contrary to the NCDRC’s opinion, the Court observed that both the State Commission as well as the Consumer Forum had elaborately appreciated the documents on record and passed the reasoned orders.

On the reliability of the report submitted by the Bank, the Court said that the report that tries to absolve the respondent-bank of its liability is based on surmises and conjectures as it abstrusely and without evidence holds that the bank has every reason to believe that wrong account number was intentionally inserted by the appellant himself for reasons best known to the appellant or on account of negligence by the appellant by not keeping the passbook in his safe and proper custody.

“The suppositions are contradictory as well as incredulous and fanciful. The appellant did not know the second respondent and would not have known his account number unless given to him by a bank officer. There was no way that the appellant would have known that the second respondent, namely Sunil Maity had an account in the same branch. No sane person would deposit cash or cheque meant to be deposited in his account in an account number belonging to another person with similar name.”

On the other hand, the bank should have been extra cautious given the fact that accounts of the appellant, Sunil Kumar Maity, and the second respondent, Sunil Maity, were with the same bank branch. The Court found it rather surprising that the NCDRC set aside the findings and conclusion recorded by the District and State Forum, by simply relying on this report.

The Court hence, restored the State Commission’s order wherein it was held that,

“Given that it is virtually impossible for one to know the account number of another person, and more so, as passbook is stated to be updated by Group ‘D’ staff of the bank, it would be myopic not to believe that the goof up created at the end of the Appellant itself. Besides this, since the Appellant made a great blunder while crediting the amount of the cheque to the account of Respondent No. 2, we feel, the Appellant must own up due responsibility in this regard.”