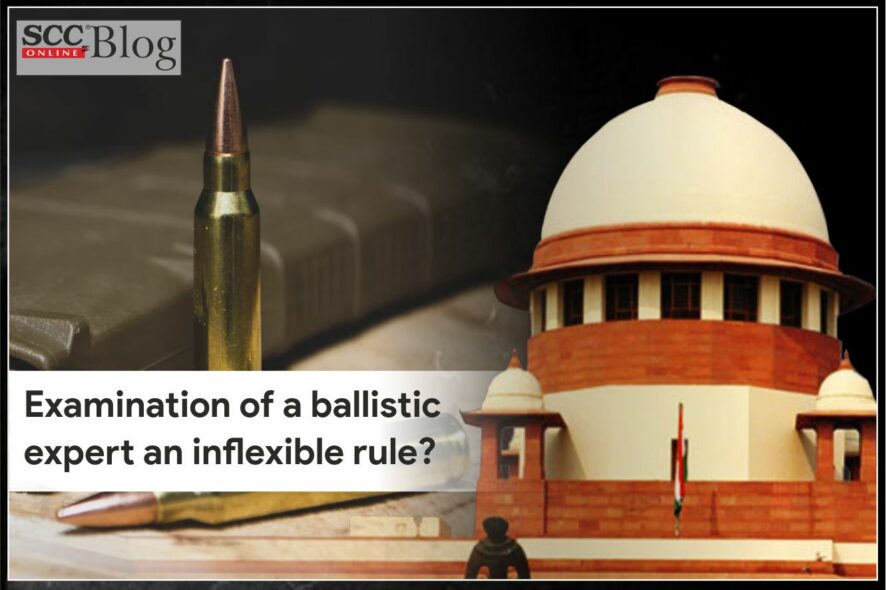 Supreme Court: In a case where deceased had sustained a gun-shot injury with a point of entry and exit, the 3-judge bench of Dr. DY Chandrachud*, AS Bopanna and Vikram Nath, JJ has held that the non-recovery of the weapon of offences or the failure to produce a report by a ballistic expert would not discredit the case of the prosecution which has relied on the eyewitness

“It has, however, been argued that in every case where an accused person is charged with having committed the offence of murder by a lethal weapon, it is the duty of the prosecution to prove by expert evidence that it was likely or at least possible for the injuries to have been caused with the weapon with which, and in the manner in which, they have been alleged to have been caused; and in support of this proposition, reliance has been placed on the decision of this Court in Mohinder Singh v. State [(1950) SCR 821] . In that case, this Court has held that where the prosecution case was that the accused shot the deceased with a gun, but it appeared likely that the injuries on the deceased were inflicted by a rifle and there was no evidence of a duly qualified expert to prove that the injuries were caused by a gun, and the nature of the injuries was also such that the shots must have been fired by more than one person and not by one person only, and there was no evidence to show that another person also shot, and the oral evidence was such which was not disinterested, the failure to examine an expert would be a serious infirmity in the prosecution case. It would be noticed that these observations were made in a case where the prosecution evidence suffered from serious infirmities and in determining the effect of these observations, it would not be fair or reasonable to forget the facts in respect of which they came to be made. These observations do not purport to lay down an inflexible Rule that in every case where an accused person is charged with murder caused by a lethal weapon, the prosecution case can succeed in proving the charge only if an expert is examined. It is possible to imagine cases where the direct evidence is of such an unimpeachable character and the nature of the injuries disclosed by post-mortem notes is so clearly consistent with the direct evidence that the examination of a ballistic expert may not be regarded as essential. Where the direct evidence is not satisfactory or disinterested or where the injuries are alleged to have been caused with a gun and they prima facie appear to have been inflicted by a rifle, undoubtedly the apparent inconsistency can be cured or the oral evidence can be corroborated by leading the evidence of a ballistic expert. In what cases the examination of a ballistic expert is essential for the proof of the prosecution case, must naturally depend upon the circumstances of each case.”

“18. In the instant case the investigating officer has categorically stated that guns seized were not in a working condition and he, in his discretion, found that no purpose would be served by sending the same to the ballistic expert for his opinion. No further question was put to the investigating officer in cross-examination to find out whether despite the guns being defective the fire pin was in order or not. In the presence of convincing evidence of two eyewitnesses and other attending circumstances we do not find that the non-examination of the expert in this case has, in any way, affected the creditworthiness of the version put forth by the eyewitnesses.”

For Appellant: Advocate S Mahendran, nominated by the SCLSC

Transporter being an agent of the owner of property cannot claim compensation under S. 166, MV Act for damage to property