An image of a bill has been doing the rounds in social media which aimed to amend Article 130 of the Constitution of India by setting up four permanent regional benches in New Delhi, Kolkata, Chennai and Mumbai (north, east, south and west) parts of the country and one Constitution Bench at New Delhi which was to hear matters of constitutional importance only. The serial number of this bill was given as Bill No. XXIV of 2020. A screenshot of the image being circulated on WhatsApp and other social media can be seen below. 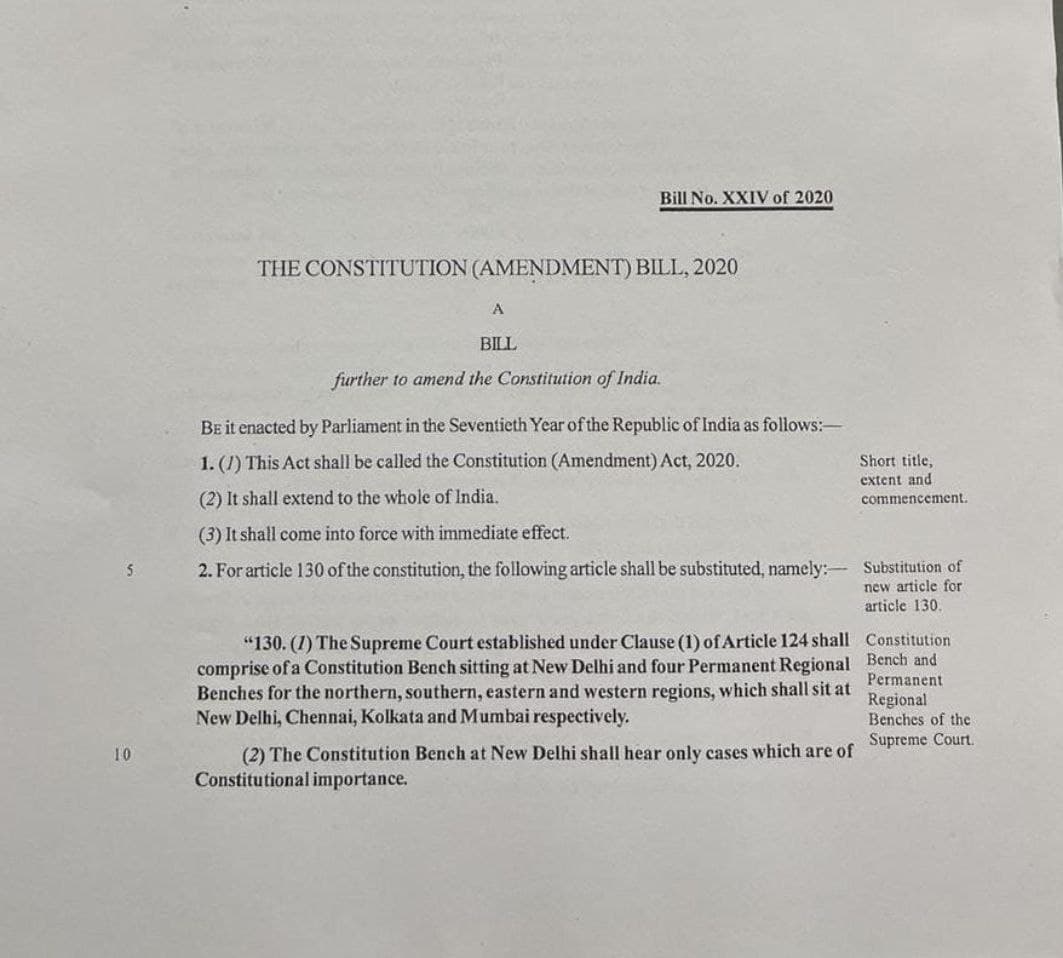 Now let us check whether this is a fake image or a real one. On the official website of the Rajya Sabha, in a pdf titled ‘Revised List of Business on 23rd July, 2021’, a private member bill which seeks to substitute Article 130 of the Constitution  has been mentioned on Page No. 22 (Serial No.13). This pdf also states one Shri P. Wilson was to move for leave to introduce this Bill to amend Article 130 of the Constitution of India. A screenshot of the Revised List of Business of Rajya Sabha of 23rd July is given below: 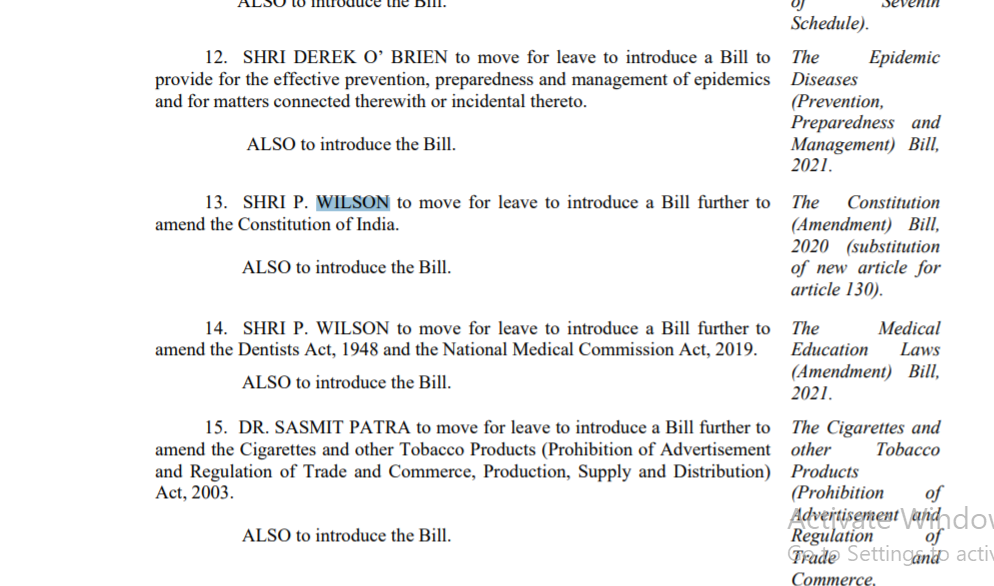 On researching more information about Shri P Wilson, we found out that he is a Rajya Sabha Member and has advocated for permanent regional benches of the Supreme Court on quite a few earlier occasions. For example an article in the Times of India mentions that

“A simple way to resolve the deadlock between the judiciary and the legislature is for the Parliament to amend Article 130 and provide for the mandatory establishment of PRB of the Supreme Court at the four places. A private member’s bill has already been introduced in the Rajya Sabha by MP P Wilson for this purpose. We can only hope that Parliament plays a proactive role to establish PRBs so that access to justice does not become the preserve of the affluent”

A further search on Rajya Sabha member, Shri P Wilson brought us to an article in The New Indian Express titled ‘DMK seeks permanent regional benches of Supreme Court’. This article stated that DMK member, Shri Wilson had written a letter to the then Union Minister for Law and Justice, Shri Ravi Shankar Prasad stating

“Because the Supreme Court is far away from many States, people living in these States are virtually deprived of their right to approach the court not only due to distance but also cost factor. Therefore, Article 32 is practically unavailable to these citizens...I urge your good self to bring in a Government Bill to amend Article 130 and establish Permanent Regional Benches of Supreme Court at New Delhi, Mumbai, Chennai and Kolkata, so that Article 32 may be easily accessible and available to all and oblige.”

From this article, we can infer that Mr Wilson has been drawing attention to this issue of setting up permanent benches of the Supreme Court on various fora.

Although the status of the bill has not been updated on the official website of Rajya Sabha, looking at the Revised List of Business for 23rd July pdf on its website and the article in Times of India further corroborating the same, it can be inferred that this bill is not fake and was all set to be introduced in the Rajya Sabha as a private member bill.

In fact, this is not a new proposal at all.  Back in 2001, as per a Press Information Bureau archive, the Full Court of the Supreme Court of India at a meeting on April 30, 2001 had unanimously opposed the setting up of Permanent Benches of the apex court outside Delhi.

CBDT clarifies differential regime between domestic investors and FPIs existed even prior to General Budget 2019 and was not creation of Finance (No. 2) Act, 2019