Madhya Pradesh High Court: The Division Bench of Prakash Shrivastava and Vijay Kumar Shukla, JJ., allowed a petition which was filed by the petitioner challenging the order dated 18-02-2021 in respect of the preventive detention under Section 3(2) of the National Security Act, 1980 (NSA) for a period of three months.

The petitioner was lawfully engaged in business of making ‘deep liquid’ which was used for the purpose of religious activities, prayers and offering in religious rituals. It was not an edible item and was only meant for non-human consumption. He was a registered manufacturer who had obtained the trademark and had also obtained all the necessary permissions and licences in this regard. The case of the petitioner was that on 17-02-2021, he was taken into custody by the respondents at Gwalior from Govind Ashram and he was produced before the Magistrate on 19-02-2021 and had been sent to jail. Further case of the petitioner was that earlier an unauthorised inspection of the petitioner’s premises was done by the concerned respondents, therefore, the petitioner had filed application under Section 102 of the Cr.P.C. before the Chief Judicial Magistrate, Jabalpur on 23-01-2021, he also alleged that the respondents during the search and seizure had misappropriated certain amount and had committed irregularities. On 30-01-2021, the Chief Judicial Magistrate had passed the order partly in favour of the petitioner.

The counsel for the petitioner had submitted that earlier a case was registered in the year 2012 and; thereafter, the present case has been registered and the subjective satisfaction has wrongly been arrived at by the District Magistrate. He also pointed out that out of the three cases of violation of food safety, two were registered on the same date and they have no link with the present case.

The respondents had submitted that on 09-02-2021 SHO Police Station Madhotal had forwarded the report to Superintendent of Police, Jabalpur mentioning about the information received from Food Safety Administration in respect of manufacturing of adulterated ghee in the name of ‘deep liquid’ by the petitioner. The Superintendent of Police thereafter had submitted the report to the District Magistrate on 11-02-2021. The District Magistrate on reaching the subjective satisfaction had passed the impugned detention order dated 18-02-2021 and had served the same alongwith the grounds of detention to the petitioner. It has further been disclosed that the State Government had approved the order of detention on 24-02-2021 and 25-02-2021.

The Full Bench of this Court in a similar recent judgment of Kamal Khare v. State of M.P., WP No.22290 of 2019, dated 22-04-2021 had dealt with the issue if in case of violation of Food Safety and Standard Act, 2006 (FSSA), the provisions of NSA could be invoked and wherein the Full Bench had reappreciated the distinction between law and order and public order and had laid down that the degree of disturbance upon the life of the community would determine whether it affects public order. It was further held that what is material is the effect of the act and not the number of acts and therefore what has to be seen is the effect of act on even tempo of life of the people and the extent of its reach upon the society and its impact.

Examining the current case on the parameters of the above case the Court noticed that grounds of detention mentions that during the search and seizure on the spot manufacturing and packing of ‘deep dravy’ was found and the raw material for manufacturing ‘deep dravy’ such as palm oil, vanaspati flavouring essence was found and its samples were collected. The order reflects that a mere suspicion was expressed that since a mixture of these material gives the fragrance of ghee, therefore, there is a possibility of the users being confused. Though there is an allegation that the petitioner was making adulterated ghee but nothing reliable has been pointed out by the respondents to show that the petitioner was manufacturing anything other than the one for which he is registered and licenced. The order also does not reflects any instance when any user had confused the ‘deep liquid’ manufactured by the petitioner with pure ghee or anybody was found using it as pure ghee. Even otherwise, there is no material to show that the activity of the petitioner had disturbed the even tempo of life or had caused any disturbance in public order.

The Court opined that the matter may make out a case for taking action under the provisions of Food Safety Standard Act if any violation thereof has been found but it is not a case where the provisions of NSA should be invoked. The Court held that impugned order passed by the District Magistrate suffered from the lack of appropriate subjective satisfaction in respect of the detention of the petitioner thus it cannot sustain. Writ petition was allowed. 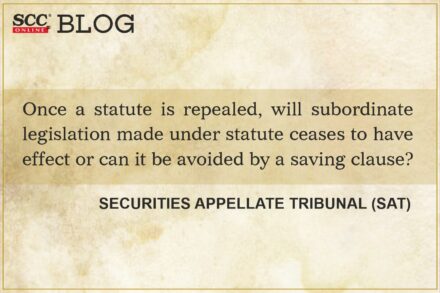 Once a statute is repealed, will subordinate legislation made under statute ceases to have effect or can it be avoided by a saving clause? SAT elaborates

[Trademark] Ker HC| No question of confusion as the products fall in different classes; HC directs Registrar of the Companies to register LLP by proposed name