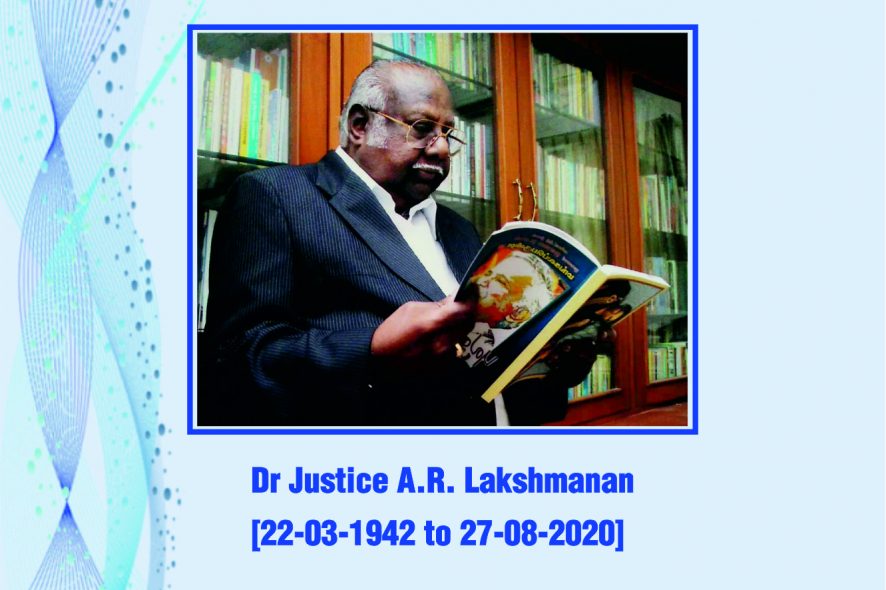 Former Supreme Court Judge A.R. Lakshmanan enrolled as a Lawyer on 10-01-1968 and served as Junior under eminent lawyers Shri. G.Ramanjuan, Shri. K.Venkataswami and R. Krishnamurthy before starting to practice on his own.

After serving as a Lawyer for 23 years, Shri. A.R. Lakshmanan was appointed as Government Pleader for Tamil Nadu to represent their matters in the Madras High Court and Supreme Court. His knowledge and skills as well as the meticulous preparation and hard work he put in to argue various matters were noticed and appreciated by all.

In 1990, he was appointed by the President of India as a Permanent Judge in Madras High Court. After 8 ½ years of tenure in this position, he was transferred to Kerala High Court and was appointed as acting Chief Justice on 3 occasions. From there he went on to serve as Chief Justice at High Courts at Rajasthan and Andhra Pradesh. He was finally elevated as a Judge of Supreme Court in the year 2002.

During as a Judge and Chief Justice of Kerala, Rajasthan and Andhra Pradesh and as Judge of Supreme Court he had delivered more than 1,37000 Judgments. Many of them are landmark Judgements. His legal acumen reflected in each and every one of his judgment. Many of them have been recognised and appreciated as thought Provoking Judgments in the history of the Indian Judiciary. The landmark Judgment delivered by him as a member of a Division Bench which banned smoking in public places is the one considered by all as an important Judgement.

He retired as a Judge of the Supreme Court in 2007 and was appointed as Chairman of the 18th Law Commission of India. In a short span before retirement from this post in 2009, he had submitted 32 reports to the Government of India recommending various measures to improve the Judicial System in India.

It is natural that the service of a person of the calibre of Shri. A.R. Lakshmanan is much sought after by various Judicial, quasi-Judicial and non-Judicial institutions. He was the secretary of Madras Bar Association for 4 times, the founder-chancellor of the National Law University at Jodhpur, Revising author of Wharton’s Law Lexicon (15th Edition), Editorial member in Indian Law Institute, Delhi, Chairman of COFEPOSA Advisory Board and Chairman of NSA Advisory Board. He served as Legal Advisor for Bank of Madura, City Union Bank, Canara Bank, IOB, New India Assurance Company and was the standing counsel for the University of Madras, Food Corporation of India, MGR Medical University.