Bombay High Court: Bharati Dangre, J., allowed a bail application and granted bail to the applicant who was accused of committing the offence of sexual assault on a minor victim.

The preliminary question before the High Court was whether the present application was maintainable because according to S.V. Gavan, APP, since the offence alleged was under SC/ST (Prevention of Atrocities) Act, 1989, an appeal would be required to be preferred under Section 14-A of the SC/ST Act.

The Court, however, agreed with the judgments other High Courts cited by Abhijeet A. Desai, counsel for the applicant, wherein it has been held that the Protection of Children from Sexual Offences Act, 2012, being a special enactment and also a subsequent enactment and containing a non obstante clause, the bar created under Section 14-A of the SC/ST Act would not operate.

It was noted that the accused was in custody since 12th November 2019; investigation was complete and chargesheet has been filed. The Court was of the opinion that on merits, there was no prohibition that applicant could not be released on bail. However, to ensure that the victim is kept away from the applicant so she may depose freely, the applicant was directed to give an undertaking that he will not enter into the jurisdiction of Pune City since the victim is a resident of Pune.

As far as the allegations under the SC/ST Act were concerned, except in a statement of the victim recorded under Section 164 CrPC, where she had disclosed that applicant abused her by mentioning her caste, there was no other material to attract the offences under the SC/ST Act. The Court stated that the effect of the statement under Section 164 CrPC and the content therein and its appreciation would be done at the time of trial. It was not the case of the prosecution that the applicant was aware that the victim belongs to scheduled caste and therefore intentionally he assaulted her sexually, being conscious of this fact. Therefore, perusal of the material in the chargesheet did not prima facie attract the provisions contained in the SC/ST Act.

In such view of the matter, the High Court released the applicant on bail, subject to the conditions imposed. [Suraj S. Paithankar v. State of Maharashtra, Bail Application No. 817 of 2020, dated 3-7-2020] 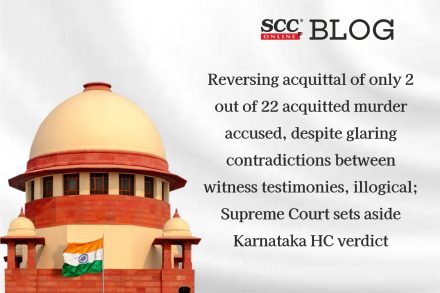 Reversing acquittal of only 2 out of 22 acquitted murder accused, despite glaring contradictions between witness testimonies, illogical; SC sets aside Karnataka HC verdict

By Editor Published on September 8, 2022