Supreme Court: In a case where pre-mature release of convicts was sought in terms of a Scheme framed by the Government of Tamil Nadu, the bench of SA Nazeer and Deepak Gupta, JJ observed that a writ of  habeas corpus  will not lie and such a prayer should be rejected by the Court where detention or imprisonment of the person whose release is sought is in accordance with the decision rendered by a court of law or by an authority in accordance with law.

“The scope of the petition of habeas corpus has over a period of time been expanded and this writ is commonly used when a spouse claims that his/her spouse has been illegally detained by the parents.  This writ is many times used even in cases of custody of children.  Even though, the scope may have expanded, there are certain limitations to this writ and the most basic of such limitation is that the Court, before issuing any writ of habeas corpus must come to the conclusion that the detenu is under detention without any authority of law.”

Whether a writ of habeas corpus would lie, for securing release of a person who is undergoing a sentence of imprisonment imposed by court of competent jurisdiction praying that he be released in terms of some Government orders/Rules providing for pre­mature release of prisoners?

Considering that in all the petitioners in the present case were sentenced to imprisonment for life, the Court held that as such their detention cannot be said to be illegal. It is not for the writ court to decide whether a prisoner is entitled to parole or remission and these matters lie squarely in the domain of the Government.  The Court, however, added that the Court which deprives a person of his liberty in accordance with law also has the responsibility to ensure that such a person though under incarceration is not denied the other fundamental rights which he is entitled to. Therefore, there can be no dispute with the proposition that anybody who is behind bars and is ill­treated or is deprived of his liberties, may approach the Court for a writ of habeas corpus.

“A writ petition by a prisoner is maintainable if his fundamental rights are violated.”

The Court, further, said that the grant of remission or parole is not a right vested with the prisoner.  It is a privilege available to the prisoner on fulfilling certain conditions.  This is a discretionary power which has to be exercised by the authorities conferred with such powers under the relevant rules/regulations. The court cannot exercise these powers though once the powers are exercised, the Court may hold that the exercise of powers is not in accordance with rules. 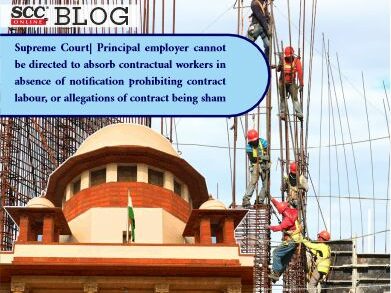