Punjab and Haryana High Court: Declining to grant relief to a law graduate who had failed to obtain the cutoff marks in the LL.B course for enrollment into the Bar, a bench comprising of Rajiv Narain Raina, J. held that it would not be possible to accept the plea of the petitioner merely on the ground that her career would be ruined if she is not able to practice in a court of law.

The Court took into account Section 7 of the Legal Education Rules, 2008 which states that the minimum marks secured by a person should be 45% in order to get admitted into the rolls of a Bar. The Court also noted that a clarification resolution was issued that those who secure less than 45% marks at graduation level but secure more than 45% at postgraduate level can apply for bar license but in the case of the petitioner she has secured only 40.87% in her post-graduation level, therefore this relaxation is not available to her. The Council for the state also pointed out that in ‘identical cases’ decided beforehand, where persons did not possess minimum qualifying marks, they were denied enrolment.

The Court did not find any merit in the petitioner’s argument that the University allowed her to pursue LL.B in spite of her marks, therefore the Bar should also make an exception for her. The Court could not be persuaded to accept this, as admission to the LL.B course and admission to the Bar are not one and the same thing. The Court also took into account that the Bar Council had notified the girl’s institution to not depart from prescribed norms and therefore, the petitioner cannot be heard to succeed on the ground that she was not at fault. The Court said that the petitioner was free to make a career in teaching after her degree. [Kitti Chhabra v. Bar Council of Punjab and Haryana, 2019 SCC OnLine P&H 2189, decided on 14-10-2019]

All HC | ‘Eliminating competition in business using writ jurisdiction not permissible’: HC decides whether a competitor can prevent a rival from exercising right to carry on business

Madras High Court directs Additional Chief Secretary to Government of Tamil Nadu, to get sensitization programmes conducted for police force regarding the rights of persons with disabilities 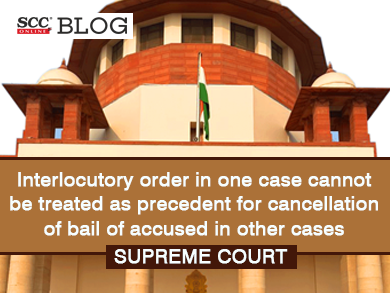 Interlocutory order in one case cannot be treated as precedent for cancellation of bail of accused in other cases: Supreme Court