The first thing which the teams were requested to do was to register at the reception. This was followed by the picking of lots, which was taking place right beside the registration process. Right after that, the teams were given their respective folders which consisted of all the required materials to help assist the teams during the event. After which they were headed to the Lecture Hall, where their registration was confirmed. Only after which they were directed to go to Campus-11 Auditorium where the inaugural session would take place.

The event commenced with the lighting of the lamp by all the respected dignitaries on the dias. This was followed by giving bouquets to all the respected dignitaries on the dias. After which Prof. SubashChander Raina KIIT School Of Law giving a warm welcome to the the Hon’ble Chief Justice of High Court of Orissa, Hon’ble Shri Justice Kalpesh Satyendra Jhaveri and all the participants. Soon after he thanked Registrar Prof.SasmitaSamanta for her constant support, KIIT Deemed to be University and Founder Prof. A. Samanta, KIIT & KISS and Vice-Chancellor Prof. H. Mohanty for their never-ending encouragement and guidance throughout this event without which this event would not have been a success. 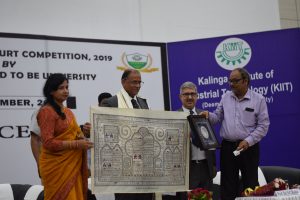 This was followed by the felicitation of the Hon’ble Chief Justice of High Court of Orissa by the Registrar, KIIT Deemed to be University Director, KIIT School of Law Prof. Subash Chander Raina. Registrar addressed the students and told them to come out of their comfort zone and take challenges so that they will be successful in life.  She urged the youth to channelize their energy in the right direction and know KIIT Deemed to be University has got the Institute of Eminence Award through years of hard work. She even mentioned that KIIT School Of Law ranked 12th among the top Indian law universities.  She said all the best to all participants and expressed her gratitude to the Hon’ble Chief Justice of Orissa High Court for his presence. 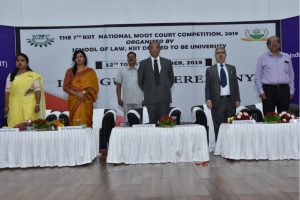 Chairman, Prof. P.K. Sarkar said that we should have a healthy and good competition ahead of us and the presence of the Hon’ble Chief Justice of Orissa High Court to inaugurate the Moot Court Competition made the experience all the more enriching for everyone present there. He then went on to mention the upcoming Bar Council of India Moot Court Competition to be held on October, 2019.  He also said that live streaming of court room like the Parliament and Legislative Assembly will help the students in getting the Practical knowledge of what is happening in the court. Lastly, he brought up important facilities of KIIT like the 24/7 Hospital and Library present all the time nearby KIIT School Of Law.

The Hon’ble Chief Justice of High Court of Orissa started his speech by saying Jai Jagannath. Sharing his experience, he said how he used to shiver when he appeared before courts and, there were no Moot Courts

while he was studying law. Quoting Mark Twain’s words “The difference between the almost right word and the right word is really a large matter; it is the difference between the lightening bug and lighting”. Hon’ble Chief Justice said that the “Law in action and law in book” is different.  So Moot Courts help this generation of law students in providing firsthand knowledge of what is really happening in the courts, welcoming and congratulating the participants he said participation in a National Moot Court itself is an achievement.

47th teams Pan India are participating this year in 7th KIIT National Moot Court Competition, which will culminate on Sunday 15th of September, 2019.

After the inaugural session ended, everyone was directed to go back to KIIT School Of Law. There the formal dinner would take place for all the participants and the respected dignitaries and respected Judges. The formal dinner consisted of many delicious items, which proved to be a hearty and sumptuous meal for all. With the ending of the formal dinner, all the events for the day came to an end.

The rounds commenced at 9am, with every team going to their allotted rooms for the rounds to begin. The previous day, the teams with the help of drawing of lots picked up their competitors for the day. With respect to their team-codes, the anonymity was maintained. Colleges were identified by their team-codes, to give an impartial platform for everyone to compete in. For the preliminary rounds, every team shall argue twice: once for petitioner and once for respondents, as conducted by Rounds 1 and 2. No teams would face each other more than once in the preliminary rounds. In determining the scores for the preliminary rounds, memorial scores would be added to the oral scores. The exchange of memorials and orientation of the teams had taken place the previous day.

The atmosphere was filled with a mix of excitement and nervousness. Days, even months of hardwork was going to pay off for the deserving few. With that note in mind, the remaining 8 teams engaged in enthusiastic rounds of arguments. After the Quarter Final rounds ended, the draw of lots for Semi Finals were to take place along with Memorial Exchange for the same were  toto take place.

After lunch, the Semi Final rounds commenced. From Quarter Final Rounds, winning teams from each round would proceed to the Semi Final Rounds on a knockout basis, with the memorial scores of the teams taken into consideration at all stages, as per the stated rules of the Competition.

With this note, the Top 4 teams were determined. The Semi Final Rounds would take place in two Rounds, the winners of each round would qualify to the Finals. Keeping that thought in mind, the remaining few put their best argument forward. With an enthralling round of questions and answers being answered justly by the speakers, this round proved to an enjoyable round for the teams as well as the one who witnessed it. The end came to an end withe the ending of the Semi Final Rounds. And everyone was looking forward to the most awaited day of the Competition.

The day had come, when the winners of the Competition would be declared. This was the day everyone was waiting for since the commencement of the Competition. The two finalist teams were ready to give their best shot. There was an esteemed panel of judges who would be judging the Final Rounds. The panel consisted of: Advocate General of Odisha, Sri Surya Prasad Mishra, Vivek Narayan Sharma from Supreme Court of India, , Justice Debabrata Das of Orissa High Court, V.K. Sahil from Delhi High Court, Bhavani Prasad Panda Vice Chancellor of Mumbia University. The judges made sure that every question was asked, and the speakers had to be well aware and alert to answer them in a logical and coherent manner. The Final Rounds made everyone sit on the edge of their seats, due to all the excitement and energy which filled the air. 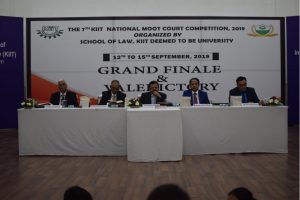 At the outset of the Valedictory Ceremony, the Director of KSOL placed the Inaugural Address and welcomed the distinguished dignitaries. He stated that in this edition of KIIT Moot Court Competition, many a colleges participated from east to west and from North to south of India barring the Union Territory of Kashmir. He predicted that next time, KIIT Moot Court Competition might be an International moot court competition.Gracing the occasion as Chief Guest, Former Chief Justice of India Justice Deepak Mishra said that Reverse Logic Speculation by reasoning power, make it a reality. Use of intellect and original logic comes from intellectual aristocracy. We must remember that losing a case is like losing a battle. “I will eventually win the war in law, even if I lose other small battles. She/he must inculcate the feeling within him/ her that “I may be destroyed but I won’t be defeated”, he stated.Acceptance of destruction is permissible but not defeat. Intuitive mind will have mastery over the artificial mind. But you can have that control, active sensibility and urban pulse. A simple civilized society has less law but a civilized complex economical society has complex law. Public service orientation must guide towards low growth of society. A lawyer is called the intellectual guardian of the society while anyone who enters into this profession shall have the sacrosanct sense of justice. The confidence should come with humility and destruction of fear. Man who allows little fear is not a real human being. Courage is the mother of all virtues. However you should have the Intellectual Courage, Justice Mishra advised. Envy destroys a man, so we should look into No comparison and No jealousy. You must accept your own limitations. You must understand what you don’t know. Knowledge is a manner of acquisition. Hypocrisy may be tolerated, but self hypocrisy is absolutely absurd. Don’t tell lies to yourself. Must strive for rule of law and have compassion for the poor. You must have patience, perseverance, passion of knowledge. Never put a boundary on the rule of law and never define rule of law. Just understand, appreciate and apply it.In quoting “Justice is not to be taken by storm. She is to be wooed by the law of advances”, he urged the students to emulate this principle. 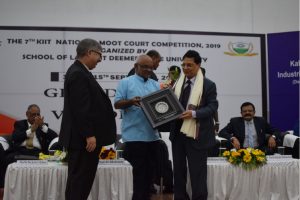 Guest of Honour, Advocate General of Odisha, Sri Surya Prasad Mishra said, knowing law alone won’t work. You must have that sort of knowledge and humanity. It is significant what the society wants from you and what you should give back. Serve the society and keep the university name high. You all are the future of this country in different aspects. Cultivate and acquire knowledge and wisdom profusely. The Vice Chancellor of KIIT DU, Prof. Hrushikesha Mohanty said that we are privileged of having a Law School in this university which is very different from the rest. The school engages in fundamental research and projects. I’ m confident; the school will produce outstanding lawyers tomorrow. Let this noble profession excel. Vivek Narayan Shrma from Supreme Court of India said that ‘Nobility, Grit, Courage’ are the top three vital tools those a lawyer should possess.Law is all about basic conscience and as the conscience of society keeps changing, law is required to be changed.Guest of Honour, Justice Debabrata Das of Orissa High Court said that hope the competition every year amplifies its standards. He advised the promising lawyers to be precise to their point and to read the mind of the court. Special Guest, V.K. Sahil from Delhi High Court emphasized that, Internships out of station instead of being a cocoon in your own city. Bhavani Prasad Panda said that to think like a lawyer, we learn from day one, but we don’t know how much it will be. He stressed upon Doctrinal method of learning. The Case law methods are the backbone. Advised to maintain discipline and respect the court. He hoped that India is destined to be a great country. 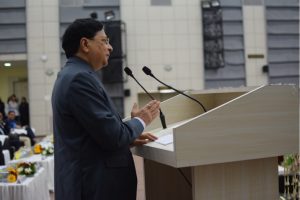 The results were declared by Niharika Singh and Himanshu Best Speaker was bagged by Jessica Thakkar who was from Pravin Gandhi College of Law.  Pravin Gandhi College of Law also got the Best Memorial. The 2nd Runners Up was OP Jindal Global Law School while 1st Runner-up was Tamil Nadu National Law University. Eventually, Pratiti Nayak proposed the Vote of Thanks. That marked the end of 7th KIIT National Moot Court Competition. 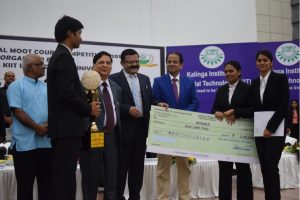 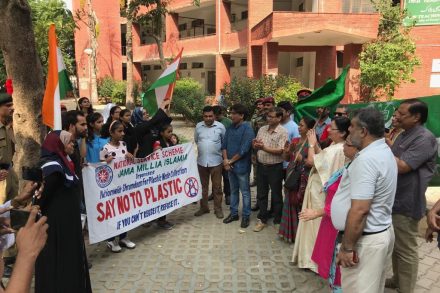 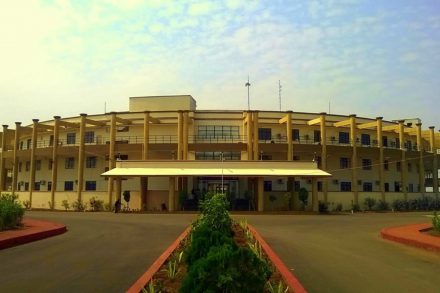 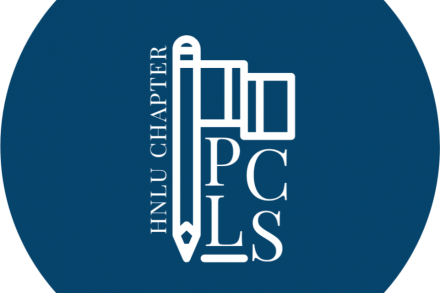