Punjab and Haryana High Court: A Division Bench of Rakesh Kumar Jain and Harnaresh Singh Gill, JJ. allowed an appeal asking for entitlement to permanent alimony in terms of Section 25 of the Hindu Marriage Act, 1955.

The marriage of the parties was solemnized on 11-6-2012 as per Hindu Sikh rites and rituals. The respondent-husband was a widower whereas the appellant wife who had claimed herself to be a spinster was already married. A petition was filed by the respondent-husband under Section 11 of the Act for annulment of marriage alleging that the factum of earlier marriage was not disclosed to him at the time of their marriage was on 11-6-2012. The learned trial court concluded that at the time of marriage by the appellant with the respondent, she was already having a spouse and, therefore, a decree under Section 11 of the Act was passed against her declaring her marriage null and void.

Anil Chawla, learned counsel for the appellant, submitted that the appellant is entitled to permanent alimony in terms of Section 25 of the Act. He basically relied upon the decision of the Supreme Court in the case of Rameshchandra Rampratapji Daga v. Rameshwari Rameshchandra Daga, (2005) 2 SCC 33 in which it was held that the jurisdiction of the Court to grant alimony was not restricted to judicial separation or divorce and encompassed all kind of decrees such as restitution of conjugal rights under Section 9, judicial separation under Section 10, declaring marriage as null and void under Section 11, annulment of marriage as voidable under Section 12 and Divorce under Section 13.

Whereas, learned counsel for the respondent, Veneet Sharma, submitted that once the marriage of the appellant with the respondent had been held to be null and void after the decree had been passed under Section 11 of the Act, the question of award of permanent alimony did not arise at all. To further his arguments, the learned counsel cited Yamunabai Anantrao Adhav v. Anantrao Shivram Adhav, 1988 (1) HLR 375. Relying on Savitaben Somabhai Bhaitya v. State of Gujarat, 2005 (2) R.C.R. (Criminal) 190, he contended that in the said case though, the dispute was in regard to the award of maintenance under Section 125 of the Code of Criminal Procedure, 1973 but it was held by the Supreme Court that marriage of a woman in accordance with the Hindu rites with a man having a living spouse was a complete nullity in the eyes of law and she was therefore not entitled to the benefit of Section 125 of the Code or the Hindu Marriage Act.

The Court observed that the judgment in the case of Ramesh Chandra, (2005) 2 SCC 33was deciding a specific issue as to whether Section 25 of the Act would be applicable in the decree passed under Section 11 of the Act which was not the issue before the Supreme Court in the case of Savitaben Somabhai Bhatiya (supra) in which Section 125 CrPC was in issue before the Supreme Court

Citing Balwant Rai Saluja v. Air India Ltd., (2014) 9 SCC 407, in which it was held that the binding nature of a decision would extend to only observation on the point raised and decided by the Court, the Court held that the present case was governed by the Ramesh Chandra case.

In view of the above, the Court allowed the present appeal only to the extent that the question of law which was framed by the Court holding that the appellant would be entitled to permanent alimony under Section 25 of the Act irrespective of the fact that the decree has been passed under Section 11 of the Act. The Court accordingly remanded the matter back to the trial court to decide the application under Section 25 of the Act, to be filed by the appellant before it for the purpose of seeking permanent alimony. [Sukhbir Kaur v. Sukhdev Singh, FAO-M No. 35 of 2016 (O&M), decided on 06-05-2019] 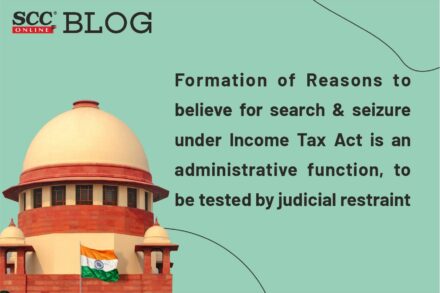 Formation of reasons to believe for search & seizure under Income Tax Act is an administrative function, to be tested by judicial restraint: SC

‘Desertion’ mentioned under S. 13(1)(ib) of Hindu Marriage Act is not withdrawal from a place but from the state of things

Reported By Saba Published on November 10, 2017