Respondent herein was the father of a three-year-old girl who was diagnosed with blood cancer. The child was admitted to appellant-hospital where Dr Raman Arora (appellant 3 herein) prepared a written protocol of the treatment detailing that the patient was to be given four cycles of chemotherapy for which injections of Vincristine were to be given intravenously and injections of Methotrexate were to be administered intrathecally. Dr Vandana Bhambri and Dr Harjit Singh Kohli assisted him. The patient was given three cycles of chemotherapy, and then her bone marrow test was conducted which showed that her condition had improved. The requisite injections for the fourth cycle were handed over to Dr Harjit Singh Kohli in a sealed packet where it was clearly written that the medicine Vincristine was to be administered intravenously only. However, Dr Kohli administered the injection intrathecally, which led to the depletion in the health of the patient and ultimately she died. The aggrieved parents of child (respondents herein) filed a complaint before the State Consumer Dispute Redressal Commission which held that the doctors and hospital (vicariously) committed gross negligence. The present appeal was filed by the hospital and doctors challenging the said order.

Learned counsel for appellants Y. Rajagopala Rao, contended that the injection Vincristine was not administered on the given date, and the State Commission had erred in giving a finding that Vincristine was administered by an anesthetist i.e. Dr Kohli. Furthermore, he stated that the Histopathology report and the chemical examination report read together with the post-mortem report did not state that the death was due to Vincristine injection. Moreover, the State Commission had failed to consider the expert report which opined that the cause of death in the present case was Toxaemia of Acute Lymphoid Leukaemia, which is a natural cause in case of cancer patients. Also, he argued that Dr Raman Arora is not liable as he did not administer the medicine.

Learned counsel for respondents, Prashant Sareen, contended that the injection was given by Dr Kohli who had testified that he, along with the help of Dr Vandana, had administered the injection intrathecally and later on acquired the knowledge that such administration was fatal. Moreover, he accused Dr. Arora for being negligent as he did not even read the ordinary precautions for treatment.

The Commission relied on S.K. Jhunjhunwala v. Dhanwanti Kumari, (2019) 2 SCC 282, and applied the principle of Bolam Test that gives grounds to hold a professional liable for negligence; and ruled that the doctors were negligent in their conduct. It was held that that admittedly the entire standard protocol was given by Dr Raman Arora and the entire treatment was rendered under his care. Therefore, he was liable for any acts/ commission or omissions done by his team or the assistants who assisted him in rendering treatment to the patient.

The National Commission remarked that the State Commission had rightly relied on the expert opinion given by the Indian Medical Association, Ludhiana which held the doctors responsible for gross negligence.

SC not pleased with Raj HC granting bail merely by “keeping in view the facts and circumstances of the case”; says Courts must record reasons 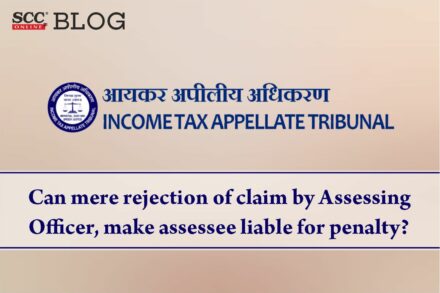 Can mere rejection of the claim by Assessing Officer, make assessee liable for penalty? ITAT explains